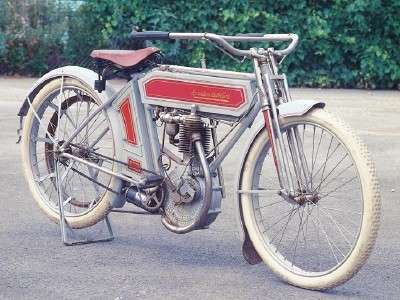 Ignatz Schwinn was better known for his bicycles than for motorcycles like his 1911 Excelsior. See more motorcycle pictures.

The 1911 Excelsior motorcycle was famed bicycle-maker Schwinn's entry into the motorcycle market.

Mr. Ignatz Schwinn had been in the business of building bicycles for several years when he decided to capitalize on the motorcycling craze that was sweeping the nation.

Strangely, the name was already in use on motorcycles produced by separate companies in both Germany and England.

Although it produced some small two-strokes, Excelsior was better known for its four-stroke singles and V-twins, the latter arriving in 1910. All of the four-stroke models used F-head (overhead intake, side exhaust) engines of Excelsior's own design.

For 1911, the 30-cubic-inch single could be ordered with a choice of magneto or battery electrical system. The leading-link front fork provided only a small amount of travel, but that was more than was afforded by the rigid frame in back.

As was common for the era, the single was driven by a wide leather belt, with progress slowed by a rear coaster brake.

On the following page are more pictures of the 1911 Excelsior. 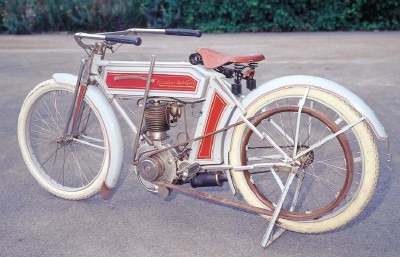 Schwinn's venture into the motorcycle market would last until 1931.

The 1911 Excelsior motorcycle featured a 30-cubic-inch single engine and a design resembling a bicycle -- not surprising considering it was designed by Schwinn.

Note the fancy "engine-turned" finish on the crankcase.
The Excelsior's rear frame tube took a detour in order to clear the large drive pulley.
Before the advent of modern cables, control motions were transferred by intricate jointed shafts.