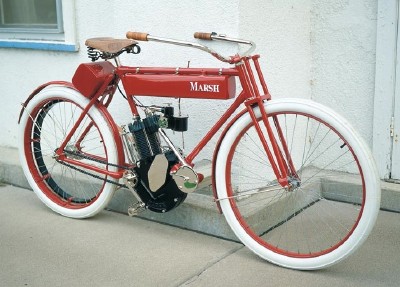 The 1904 Marsh was built with parts crafted in-house at the Marsh brothers factory in Brockton, Mass. See more motorcycle pictures.

The 1904 Marsh motorcycle was built by the Marsh brothers, one of the first of the numerous motorcycle manufacturers dotting America's Eastern Coast in the industry's early days. Located in Brockton, Massachusetts, the Marsh brothers built a motorized bicycle in 1899, with regular production of motobikes commencing the following year.

Unlike many early manufacturers, which used engines built by outside suppliers, Marsh made its own.

Like most powerplants of the day, it had a single cylinder with an intake valve opened by suction created when the piston was on its downward stroke (called an "atmospheric intake valve") and a mechanically actuated side exhaust valve.

The spark plug was fired by a "total loss" ignition system, meaning there was no generator to recharge the battery; when it went dead, it was recharged by an outside source or replaced.

Though the first production engines produced less than two horsepower, a racing engine offering six horsepower was built in 1902. The motorcycle it powered could reach nearly 60 miles per hour, a blistering speed at the time.

In 1905, the Marsh brothers teamed up with Charles Metz and the resulting motorcycles were called Marsh & Metz, or just M.M.

Marsh & Metz was among the first companies to offer a V-twin engine. It was a 45-degree unit that arrived around 1906. Two years later, a 90-degree V-twin appeared, which was claimed to offer better internal balance.

But the pioneering manufacturer didn't last long. Like many others of the era, M.M. folded under the weight of stiff competition, closing its doors in 1913.

For more pictures of the 1904 Marsh motorcycle, continue to the next page. 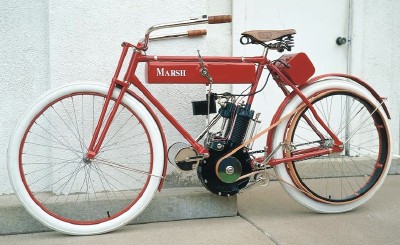 The battery is in the box beneath the seat, and the long chrome lever opens the exhaust valve slightly to ease starting.

The 1904 Marsh was little more than a motorized bicycle, but was nicely designed and one set up for racing could go 60 mph.

The 442-cc single-cylinder engine had an atmospheric overhead intake valve and a mechanically activated side exhaust value.
In a practice common at the time, the Marsh used the engine as a structural frame member.