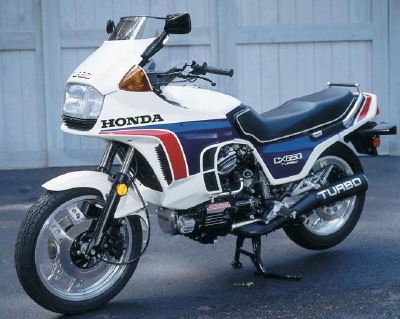 With its power and speed, the Honda CX650 T was a favorite among riders, though not among insurers. See more motorcycle pictures.

With the 1983 Honda CX650T motorcycle, Honda turned up the heat on a type of street superbike the Japanese company itself had introduced to the world: the turbocharged motorcycle.

The sportbike battle had been raging for a good 10 years when Honda introduced this new and innovative competitor, the Honda CX500 Turbo. Not only was it the world's first turbocharged production bike, it also featured fuel injection and the most radical fairing yet seen on a motorcycle.

The Honda CX500 Turbo's powerplant was based on Honda's water-cooled V-twin with four pushrod-operated over-head valves per cylinder also used in the shaft-drive CX500 introduced a few years earlier -- itself a groundbreaking design.

The base engine also was used in the Silver Wing, a touring machine intended as the Gold Wing's little brother, as well as a Custom model with "chopper" styling.

In 1983, both versions of the V-twin were bumped to 650 cc. Otherwise, the 1983 Honda CX650T motorcycle was mostly a carryover from the CX500 Turbo, although the color scheme was changed from pearlescent eggshell with red and black accents to the pearlescent white with red and blue trim as shown on our featured bike.

With their complex fuel injection systems and related sensors and actuators, the CX Turbos carried high prices and were a nightmare for shade-tree mechanics.

In addition, spiraling insurance rates were affecting all performance bikes, and many insurers looked unfavorably at turbocharged models in particular, assessing them with exorbitant premiums.

So although the whistle of the turbo and resulting kick of acceleration boiled the adrenaline of those who rode one, the 1983 Honda CX650T motorcycle -- along with the imitators that soon followed -- sadly suffered a premature extinction.

Go to the next page to see more pictures of the 1983 Honda CX650T motorcycle. 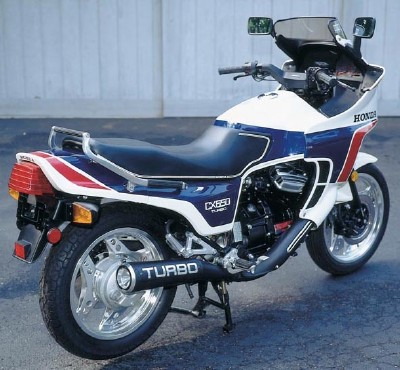 The CX650T was fast, but insure. The more sedate versions of Honda's CX family were less expensive, and sold better.

The CX's V-twin was unusual in that each of the head's four valves were operated by pushrods rather than overhead cams. Mounted "sideways" in the frame à la Moto Guzzi, the rather pedestrian engine grew significantly stronger with the addition of electronic fuel injection and a turbocharger.

Th 1983 CX650T's turbocharged version of Honda's popular 650-cc V-twin had a robust 97 horsepower.
Windshield, fairing, gauges and mirrors were nicely integrated into the CX650T's basic design.
Turbocharged motorcycles did provide more power without increasing displacement. Several makers offered them over the years, but without lasting success.