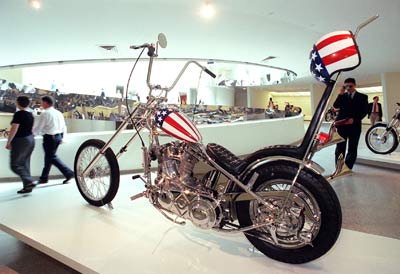 Image Gallery: Choppers A replica of one of the choppers from the film "Easy Rider." See more chopper pictures.­
Ray Abrams/AFP/Getty Images

Within the motorcyclist community, there's a group of enthusiasts who like to get back to the basics. They want to ride bikes that are powerful, fast and stripped down to the bare essentials. They might take an existing bike and tear it apart, or they might start from scratch to build a bike to their own specifications. They make choppers.

What exactly is a chopper? The definition is fairly flexible, varying from one region to another, but in general, a chopper is a customized motorcycle free of anything that isn't required to make it go -- from windshields and mirrors to front brakes and speedometers. In this article, we'll take a look at the basic parts of a chopper and learn about the famous bike shops in the United States.

The history of the chopper begins shortly after World War II. Veterans sought out motorcycles like the ones they saw or drove during the war -- they'd buy a bike and then modify it to make it more like the ones they used to ride. Many of them removed the front fender from the bikes. The rear fender often came in two pieces -- the soldiers removed the rearmost section. They called the new, shorter fenders "bobbed" fenders, and so people who rode bikes with these sorts of modifications were called bobbers.

Later, builders began to make more radical changes to bikes. Many would strip it down to the frame and rebuild it piece by piece. They even began to fabricate parts like custom exhaust pipes or gas tanks to make their own bike a truly unique ride. Some began to call these bikes "choppers," because the owner had chopped up an existing bike to create something new.

Movies like "The Wild One" and "Easy Rider" broug­ht choppers to the public's attention. The 1960s and 70s saw a new generation of chopper enthusiasts. Bikers spent weeks or months trying to create the perfect ride, whether it was designed for comfort, touring, speed or simply to make jaws drop.

In the 1980s, motorcycle companies like Harley-Davidson began to offer what they called custom bikes -- mass-manufactured motorcycles based off the most popular chopper designs. Coupled with an economic recession, this move nearly made chopper culture go extinct. It was only in the mid-'90s that custom bike shops began to flourish again, and today the culture is as strong as it ever was. You don't even have to seek out a chop shop if you don't want to -- you can order everything you need to build your own chopper on Web pages.

In the next section, we'll look at the most important part of any chopper -- the frame.