by Marshall Brain
NEXT PAGE
­

And, there's something else, too -- the aura of Harley-Davidson. Some call it Harley mania. Others refer to it as Harley culture. If you're having a hard time understanding this concept, just consider this: Every year, hundreds of thousands of Harley-Davidson enthusiasts converge on towns like Sturgis, S.D. (August), Myrtle Beach, S.C. (May) and Daytona Beach, Fla. (March) for an entire week of partying and vendor demos. These folks ride their bikes hundreds if not thousands of miles just to participate.

Unlike any other major brand of bike, there's a certain something that Harley-Davidsons carry with them. It could simply be the sound of a large V-Twin engine through straight pipes at full throttle -- this has certainly been glamorized in dozens of movies. But we think it's more than that. Call it mystique if you like. There is definitely something to it.

In this article, you will have a chance to learn about the Zen of the Harley-Davidson from a HowStuffWorks perspective. We will cover the evolution of the engines, the current product line and the customization process. The next time you pull up alongside a Harley-Davidson, you'll see it in a completely different way.

Before you can begin to understand the Harley mystique, you'll need to have a basic understanding of how motorcycles work.

­At its very simplest, a motorcycle is a bicycle with an engine. If you go all the way back to the beginnings of Harley-Davidson Motorcycles in 1903, a motorcycle is exactly that. The first production Harley-Davidson was a bicycle with a slightly modified frame to make the engine easier to mount. A leather belt carried the power from the engine to the rear wheel. This motorcycle had pedals, so you could pedal it like a bicycle if you wanted to. It also had a normal coaster brake in the rear hub that you could apply with the pedals (by pedaling backwards), just like you would on a normal one-speed bicycle today.

Today a motorcycle does not really look at all like a bicycle. Both vehicles have two wheels, but that is where the similarity ends. Read on to learn about today's motorcycles. 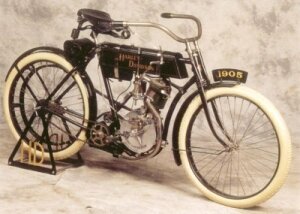