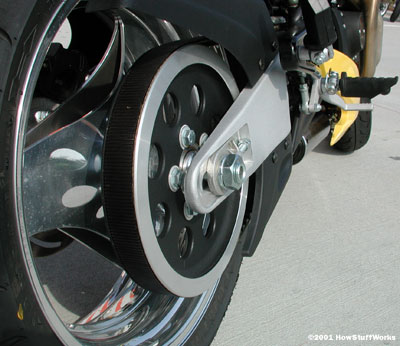 This motorcycle’s transmission connects to the rear wheel with a belt drive system.

The transmission powers the drive system for the chopper, which is either a chain system or a belt system. Chains and belts connect one side of the drive system, the transmission, to the other side, the rear tire. Transmissions only provide power to the rear tire; the front wheels aren't powered. A small sprocket in the drive system turns the chain or belt at the transmission end, which then turns a larger sprocket at the tire end, making the tire move. Most choppers use an open primary system, meaning the belt or chain isn't covered by housing or casing -- it's left out in the open for all to admire. It also means that you need to pay attention when riding one because you don't want to get caught in the chopper's drive system.

In the next section, we'll look at the other components of a chopper and how they set these bikes apart from other motorcycles.