In this article, we'll learn how the fuel gets into the cylinder of the engi­ne, and what terms like "multi-port fuel injection" and "throttle body fuel injection" mean.

The Fall of the Carburetor

­For most of the existence of the internal combustion engine, the carburetor has been the device that supplied fuel to the engine. On many other machines, such as lawnmowers and chainsaws, it still is. But as the automobile evolved, the carburetor got more and more complicated trying to handle all of the operating requirements. For instance, to handle some of these tasks, carburetors had five different circuits:

In order to meet stricter emissions requirements, catalytic converters were introduced. Very careful control of the air-to-fuel ratio was required for the catalytic converter to be effective. Oxygen sensors monitor the amount of oxygen in the exhaust, and the engine control unit (ECU) uses this information to adjust the air-to-fuel ratio in real-time. This is called closed loop control -- it was not feasible to achieve this control with carburetors. There was a brief period of electrically controlled carburetors before fuel injection systems took over, but these electrical carbs were even more complicated than the purely mechanical ones.

At first, carburetors were replaced with throttle body fuel injection systems (also known as single point or central fuel injection systems) that incorporated electrically controlled fuel-injector valves into the throttle body. These were almost a bolt-in replacement for the carburetor, so the automakers didn't have to make any drastic changes to their engine designs.

When You Step on the Gas

The gas pedal in your car is connected to the throttle valve -- this is the valve that regulates how much air enters the engine. So the gas pedal is really the air pedal. 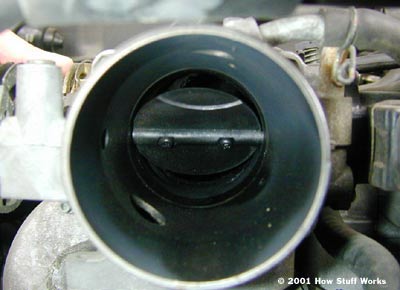 Sensors monitor the mass of air entering the engine, as well as the amount of oxygen in the exhaust. The ECU uses this information to fine-tune the fuel delivery so that the air-to-fuel ratio is just right.

­A fuel injector is nothing but an electronically controlled valve. It is supplied with ­pressurized fuel by the fuel pump in your car, and it is capable of opening and closing many times per second.

When the injector is energized, an electromagnet moves a plunger that opens the valve, allowing the pressurized fuel to squirt out through a tiny nozzle. The nozzle is designed to atomize the fuel -- to make as fine a mist as possible so that it can burn easily.

The amount of fuel supplied to the engine is determined by the amount of time the fuel injector stays open. This is called the pulse width, and it is controlled by the ECU.

The injectors are mounted in the intake manifold so that they spray fuel directly at the intake valves. A pipe called the fuel rail supplies pressurized fuel to all of the injectors.

In order to provide the right amount of fuel, the engine control unit is equipped with a whole lot of sensors. Let's take a look at some of them.

­In order to provide the correct amount of fuel for every operating condition, the e­ngine control unit (ECU) has to monitor a huge number of input sensors. Here are just a few:

There are two main types of control for multi-port systems: The fuel injectors can all open at the same time, or each one can open just before the intake valve for its cylinder opens (this is called sequential multi-port fuel injection).

The advantage of sequential fuel injection is that if the driver makes a sudden change, the system can respond more quickly because from the time the change is made, it only has to wait only until the next intake valve opens, instead of for the next complete revolution of the engine.

­­The algorithms that control the engine are quite complicated. The software has to allow the car to satisfy emissions requirements for 100,000 miles, meet EPA fuel economy requirements and protect engines against abuse. And there are dozens of other requirements to meet as well.

The engine control unit uses a formula and a large number of lookup tables to determine the pulse width for given operating conditions. The equation will be a series of many factors multiplied by each other. Many of these factors will come from lookup tables. We'll go through a simplified calculation of the fuel injector pulse width. In this example, our equation will only have three factors, whereas a real control system might have a hundred or more.


In order to calculate the pulse width, the ECU first looks up the base pulse width in a lookup table. Base pulse width is a function of engine speed (RPM) and load (which can be calculated from manifold absolute pressure). Let's say the engine speed is 2,000 RPM and load is 4. We find the number at the intersection of 2,000 and 4, which is 8 milliseconds.


From this example, you can see how the control system makes adjustments. With parameter B as the level of oxygen in the exhaust, the lookup table for B is the point at which there is (according to engine designers) too much oxygen in the exhaust; and accordingly, the ECU cuts back on the fuel.

Real control systems may have more than 100 parameters, each with its own lookup table. Some of the parameters even change over time in order to compensate for changes in the performance of engine components like the catalytic converter. And depending on the engine speed, the ECU may have to do these calculations over a hundred times per second.

Performance Chips
This leads us to our discussion of performance chips. Now that we understand a little bit about how the control algorithms in the ECU work, we can understand what performance-chip makers do to get more power out of the engine.

Performance chips are made by aftermarket companies, and are used to boost engine power. There is a chip in the ECU that holds all of the lookup tables; the performance chip replaces this chip. The tables in the performance chip will contain values that result in higher fuel rates during certain driving conditions. For instance, they may supply more fuel at full throttle at every engine speed. They may also change the spark timing (there are lookup tables for that, too). Since the performance-chip makers are not as concerned with issues like reliability, mileage and emissions controls as the carmakers are, they use more aggressive settings in the fuel maps of their performance chips.

For more information on fuel injection systems and other automotive topics, check out the links on the next page.

Can you convert a carburetor to fuel injection?

An aftermarket fuel injection conversion kit can replace a carburetor with fuel injectors.

How much does a fuel injection conversion system cost?

While there are a few systems available for less than $1,000, most cost much more than that.

Depending on your engine, fuel injection can add 10 to 20 horsepower.

Do old cars have fuel injectors?

Prior to 1990, most cars in the United States had a carburetor, not fuel injectors, though fuel injection has been around since the 1950s and has been used widely on European cars since 1980.

What are the different types of fuel injection systems?