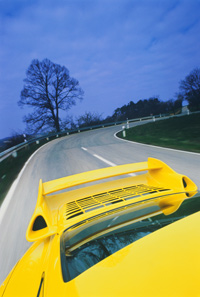 This is actually a pretty complicated question. What you are asking is what constant speed will give the best mileage. We won't talk about stops and starts. We'll assume you are going on a very long highway trip and want to know what speed will give you the best mileage. We'll start by discussing how much power it takes to push the car down the road.

The power to push a car down the road varies with the speed the car is traveling. The power required follows an equation of the following form:

The letter v represents the velocity of the car, and the letters a, b and c represent three different constants:

These constants will be different for every car. But the bottom line is, if you double your speed, this equation says that you will increase the power required by much more than double. A hypothetical medium sized SUV that requires 20 horsepower at 50 mph might require 100 horsepower at 100 mph.

But there is something going on in the engine that eliminates this theory. If your car is going 0 mph your engine is still running. Just to keep the cylinders moving and the various fans, pumps and generators running consumes a certain amount of fuel. And depending on how many accessories (such as headlights and air conditioning) you have running, your car will use even more fuel.

So even when the car is sitting still it uses quite a lot of fuel. Cars get the very worst mileage at 0 mph; they use gasoline but don't cover any miles. When you put the car in drive and start moving at say 1 mph, the car uses only a tiny bit more fuel, because the road load is very small at 1 mph. At this speed the car uses about the same amount of fuel, but it went 1 mile in an hour. This represents a dramatic increase in mileage. Now if the car goes 2 mph, again it uses only a tiny bit more fuel, but goes twice as far. The mileage almost doubled!

Efficiency of an Engine

This trend continues to a point. Eventually, that road load curve catches up with us. Once the speed gets up into the 40 mph range each 1 mph increase in speed represents a significant increase in power required. Eventually, the power required increases more than the efficiency of the engine improves. At this point the mileage starts dropping. Let's plug some speeds into our equation and see how a 1 mph increase from 2 to 3 mph compares with a 1 mph increase from 50 to 51 mph. To make things easy we'll assume a, b and c are all equal to 1.

So, for most cars, the "sweet spot" on the speedometer is in the range of 40-60 mph. Cars with a higher road load will reach the sweet spot at a lower speed. Some of the main factors that determine the road load of the car are:

If you drive your car in the "sweet spot" you will get the best possible mileage for that car. If you go faster or slower, the mileage will get worse, but the closer you drive to the sweet spot the better mileage you will get.

"What speed should I drive to get maximum fuel efficiency?" 27 September 2000.
HowStuffWorks.com. <https://auto.howstuffworks.com/fuel-efficiency/fuel-economy/question477.htm> 5 February 2023
Citation
Featured
Special Offer on Antivirus Software From HowStuffWorks and TotalAV Security
Try Our Crossword Puzzles!
Can You Solve This Riddle?
More Awesome Stuff