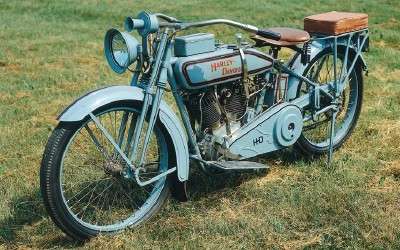 From a styling standpoint, the 1916 Harley-Davidson J motorcycle was a great leap forward from the brand's earlier bikes. The fuel tank had rounded rather than square-cut corners, and the motorcycle took on a longer, lower appearance. Also, pedals no longer sprouted from the lower frame on models with the three-speed transmission, which now sported a modern kickstarter.

Other than the kickstarter, however, there were few mechanical changes of note. Forks remained a leading-link design with enclosed coil springs, and the 61-cubic-inch intake-over-exhaust V-twin received only a curved intake manifold to smooth the airflow into the cylinders.

This would be the last year Harleys would wear their traditional grey paint, which had graced the machines since 1906. Its replacement -- Olive Drab -- would be hardly more colorful, yet would enjoy an equally long tenure.

More pictures of the 1916 Harley-Davidson J are on the next page. 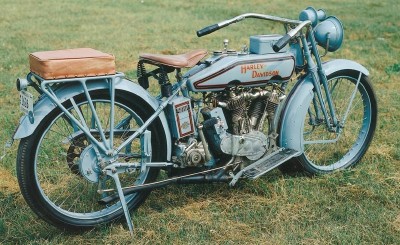 Though there were many stylistic changes in the 1916 Harley-Davision J, there were few noteworthy mechanical advancements.

In 1915 electric lighting systems became available on Harly-Davidson motorcycles and the 1916 Harley-Davidson J motorcycle pictured here is so equipped. The model also debuted a modern kickstarter.

Electric lighting that had become available in 1915 was fitted to this 1916 J.
Among the few mechanical changes was a curved intake manifold to feed the venerable F-head V-twin.
The magneto, located behind the engine, was switched on and off with a key.
Fitted with a sidecar and passenger seat, motorcycles of the era often served as family transportation.