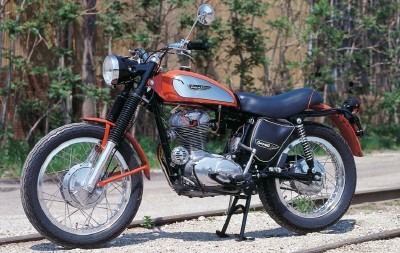 Though the 1970 Ducati 350 Scrambler motorcycle was not the most powerful model Ducati produced, it represented a fine example of this company's ability to get a lot of performance through design efficiency.

Starting out as an electronics firm in the mid-1920s, Ducati lost everything in World War II and had to rebuild.

As in many other countries, Italy was in need of personal transport, so the company began producing a small engine that could be mounted on a bicycle. However, it differed from most others of its kind in being a four stroke with integral two-speed transmission.

By the early 1950s, Ducati was building complete motorcycles, though only small, pedestrian ones. This changed in 1955 when a 98-cc single appeared with bevel-driven overhead cam, a layout that would define Ducati engines for the next few decades.

It was instantly successful in racing, and led to larger and more powerful machines.

Another Ducati trademark was desmodromic valve actuation, which was introduced on a 125-cc racer in 1956. Instead of using springs to close the valves, which often "floated" at high rpm, they were closed mechanically.

This feature didn't show up on production models until the late 1960s, but these 250- and 350-cc singles were quick bikes indeed, and a 450 that followed was even quicker. However, only the sporting Ducatis got the "desmo" valve-train; tamer models used valve springs.

The 350 Scrambler featured here was considered one of the "tamer" models, though it was still fast for a bike of its size. Singles lasted until 1973, by which time the V-twins introduced two years earlier had taken over the showroom.

Go to the next page for more pictures of the 1970 Ducati 350 Scrambler motorcycle. 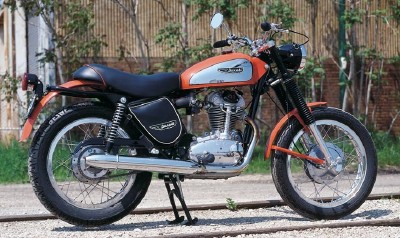 The Ducati 350 Scrambler was considered a tame Ducati, despite its relative speed and quickness.

The speedometer needle's movement was "reversed."
Single-valve Ducatis such as the Scrambler lasted until 1973, when V-twins gained popularity.
The bevel-gear cam drive is evident inside the black ring at the top of the engine.