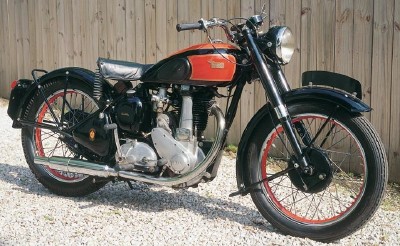 The B33 was typical of early postwar BSAs, with a 500-cc overhead-valve single. See more motorcycle pictures.

The 1949 BSA B33 motorcycle was developed by one of England's oldest motorcycle companies. BSA grew out of a consortium of firearms manufacturers who first expanded into bicycles, then into the fledgling "motor bicycle" market by fitting a stronger frame with a Belgian-made Minerva engine.

That was in 1905; by 1910, Birmingham Small Arms was building its own 30-cubic-inch flathead single, and BSA was on its way to becoming a household name.

Though the company also built large V-twins for 20 years before World War II, its stock in trade remained midsize singles. These were often available at bargain prices and thus sold in large volume.

During the war, BSA supplied more than 120,000 of its M20 500-cc flathead singles to Allied forces, where their simple mechanicals made them reliable and easy to repair.

While contests of speed were typically won by other makes, BSAs had more than their share of success in endurance races, furthering their reputation for toughness that carried far more appeal to the everyday rider.

Typical of early postwar BSAs is the B33, which arrived in 1947 with a 500-cc (30-cubic-inch) overhead-valve single. Simple and stout, it formed the basis for a series of similar machines that carried on through the 1950s.

Modern telescopic forks were used in front, but early versions had a rigid frame and thus no rear suspension save for the sprung saddle.

Vertical twins joined the line after the war and became legends in their own right. And adding those to an early-1950s selection of popular small- to large-displacement singles briefly made BSA the largest motorcycle company in the world.

See the next page for a variety of pictures of the 1949 BSA B33 motorcycle. 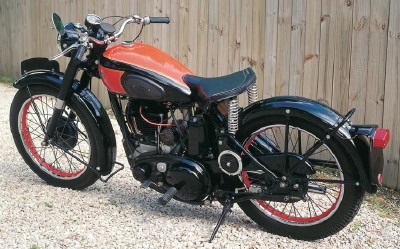 Early versions of the B33 had a rigid frame.

A "chimney" on the engine enclosed pushrods.
A notch in the fuel tank accommodates the seat.
With just a speedometer, shifting was best done by ear.