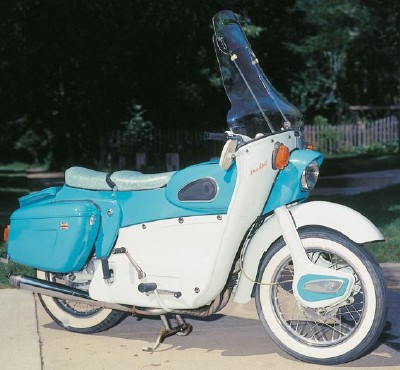 Despite its rather odd looks, the Ariel Leader was highly functional and offered many useful features and options. See more motorcycle pictures.

Before the 1959 Ariel Leader motorcycle was introduced, Ariel had been best known for its four-stroke singles, twins, and the unique Square Four. But after exhaustive market research, the company decided it was time to change direction.

What appeared in July 1958 was a combination of several new technologies for Ariel, primarily the use of a 250-cc two-stroke engine, pressed-steel frame, and odd-looking trailing-link front forks. The enclosed styling allowed for a chassis structure that stored fuel beneath the seat, while the "tank" served as a convenient storage area.

Another interesting aspect of the Leader was the long list of options available. As a result, few of the 22,000 produced were exactly the same. Color choices included Oriental Blue or Cherry Red with Admiral Gray accents; the model featured here sports the optional side bags and rear luggage rack.

By 1959, Ariel had put all its cards into the Leader, having dropped the Square Four that year. A cheaper, stripped Arrow model followed, as did a Golden Arrow "sport" version. But the deck was stacked against it by this time as Japanese imports flooded the market, and Ariel folded its hand in 1965.

Go to the next page for more pictures of the 1959 Ariel Leader motorcycle. 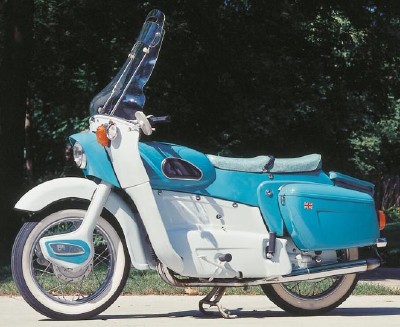 An enclosed body made cleaning the Leader a snap.

The 1959 Ariel Leader had a variety of options available, including unique color choices, optional side bags, and a rear luggage rack.