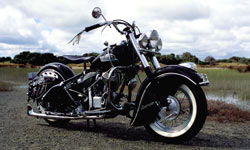 Some stories are bound to upset at least some people, and this may be one of them. The owners, riders and collectors of vintage motorcycles are such a passionate bunch that highlighting one brand or model over another is bound to elicit strong reactions. Indeed, it's hard to think of a brand name customers tattoo on their bodies more than Harley-Davidson. Whether it's a Harley or Honda or Indian, there's an intense passion and following that prompts those with the means to fork over $1 million-plus for a particularly coveted vintage motorcycle, although it's also possible to pick one up for as little as $100 [source: Cerilli].

It's important to remember that a vintage motorcycle is not necessarily collectible -- it can also mean that it's just old. There is no widely accepted definition for how old a motorcycle must be to qualify as vintage, but some experts say it's anything older than 1974, and others lump in Japanese bikes from the early 1980s [source: Wagnon].

According to John Cerilli, the co-founder of Vintage Motorcycles Online, to be both vintage and collectible is a function of a number of factors, including the condition and originality of the motorcycle, when and how many of the bikes were made, how long the company making it was in business and whether or not the bike was associated with someone famous.

Read on to find out 10 the most popular vintage motorcycle brands out there today.