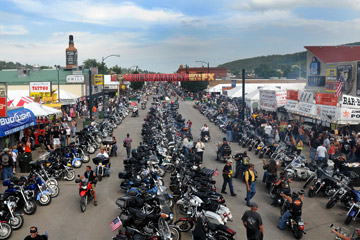 The small town of Sturgis, S. D., is a peaceful community almost all year long; however, every year, for one week in August, the town hosts the biggest and wildest motorcycle rally on the planet. The Sturgis Motorcycle Rally is one of the longest-running weeklong motorcycle rallies in the country, and in 2010 it'll celebrate its 70th year.

There are plenty of other motorcycle rallies throughout the world, but over the years the Sturgis rally has earned its fame by attracting motorcycle enthusiasts from all over the globe. But everyone in attendance shares at least one thing in common -- they're all looking for a good time. The weeklong event boasts of bike shows, concerts, motocross events, lots of alcohol and more than its share of unconventional entertainment.

Motorcycle enthusiasts know it simply as "Sturgis," or "The Rally," and the people of South Dakota know it as the time of the year where their state's population almost doubles in just one week. But what makes this bike rally so special? In this article we'll find out how the rally started, what goes on there and the type of culture the rally brings to Sturgis every year. Up next, let's see how the rally got its start. 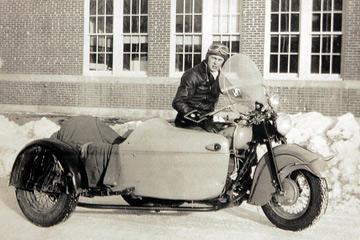 This undated photo shows Neil Hultman riding a motorcycle with a sidecar in Sturgis, S.D. Hultman is the second-oldest surviving member of the Jackpine Gypsies, the motorcycle club that started what is now the Sturgis Motorcycle Rally.
AP Photo/Sturgis Motorcycle Museum

In Sturgis, S.D., on August 14, 1938, a group of nine men raced their motorcycles with a small group of people watching. The bikers were known as the Jackpine Gypsies Motorcycle Club which later organized the Sturgis Motorcycle Rally along with a fellow member and owner of the Indian Motorcycle Shop, J.C. "Pappy" Hoel. Pappy Hoel worked for his family's ice business before buying a motorcycle franchise and becoming one of the most successful dealers in South Dakota [source: Hoel Motors]. Since then, the rally has continued every year since that first race in 1938 -- with the exception of two years during World War II. Now, seven decades after the first rally, the Sturgis Motorcycle Rally is still going strong and doesn't show any signs of slowing down.

An event that started out as a small group of racers has turned into the largest motorcycle gathering in the world. All types of motorcycles are represented at the rally as well as all different types of people. In 1960 the attendance of the rally topped only 800 people and in 1970 that number grew to 2,000. The Rally mentions in its official guidebook that after 1970 the attendance of the weeklong event grew exponentially. In the year 2000 about 550,000 people attended the rally [source: The Sturgis Rally Guide Book]. Of course, Daytona Beach, Fla., is infamous for its Bike Week event, but one of the things that makes the attendance of the Sturgis Motorcycle Rally so exceptional is that the city of Sturgis normally only has a population of about 6,000 people [source: City-Data.com]. In addition to the city of Sturgis' small population, the entire state of South Dakota nearly doubles its population when the rally bikers show up each year.

The Sturgis Motorcycle Rally keeps its traditional racing roots by offering a half-mile (.8-kilometer) motorcycle race similar to Hoel's first race. Other races, competitions, concerts and far more entertainment than the original founders ever planned have been added, too. 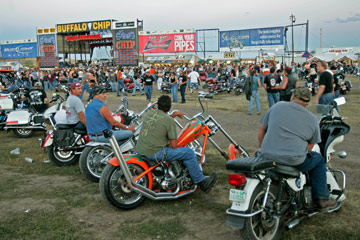 Bikers sit on their motorcycles as they wait for a concert to start at the Buffalo Chip Campground at the Sturgis Motorcycle Rally in Sturgis, S.D.
AP Photo/Morry Gash

While many bikers make long road trips to come to Sturgis, the events that are held during the week definitely don't disappoint. The events and races are divided into several areas in and around the town of Sturgis, which is broken up into three zones. The zones are: the Sturgis Zone, the Bear Butte Zone and the Black Hills Zone [source: The Sturgis Rally Guide Book].

The Sturgis Zone is the primary hub of the rally and Main Street is the place to be for the best people and bike watching. The Sturgis Rally Guide Book recommends visiting Main Street at least one evening out of all the nights at the rally. Unlike some of the other areas, Sturgis doesn't have any major concerts, but many rally attendees visit the area for the bars, bike shops and tattoo parlors. Sturgis also provides motorcycle races during the rally as well.

The Bear Butte Zone, just east of the city of Sturgis is where the rally holds its major concerts. The Buffalo Chip and Rockin' the Rally are the two main venues for the concerts. Performers at these concerts have included Tom Petty, Keith Urban and Kid Rock. For the 70th anniversary, the rally will host ZZ Top as one of the main headliners [source: Buffalo Chip]. This zone is also known for having rowdy campgrounds and for hosting entertainment shows close to where the campgrounds are so that attendees can consume alcohol but not have to ride their bikes to the shows. The Bear Butte zone hosts motorcycle and car drag races during the week as well.

In addition to the concerts, many bikers come to the rally for the scenic rides, which are found in the Black Hills Zone. This area of South Dakota and Wyoming includes Mt. Rushmore, the Badlands and several monuments including the Crazy Horse Monument. This area of the Sturgis rally is quieter and more secluded than the other two zones.

Motorcycle hill climbs are also part of the rally, where bikers compete by racing their bikes up steep inclines. The rally also hosts the AMD World Championship of Custom Bike Building, a favorite event among attendees. So, for bikers who are looking for more than just scenic rides, the Sturgis rally provides a full array of entertainment that could rival Las Vegas. 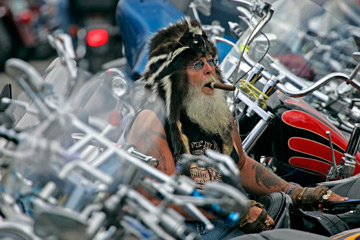 Tiny Carnajan of Minneapolis, Minn., takes a break on his bike at the Sturgis Motorcycle Rally in Sturgis, S.D.
AP Photo/Morry Gash

Despite all the concerts, famous performers, bike shows and scenic rides, the Sturgis Motorcycle Rally is also well-known for its surrounding culture. Besides the bikes, the rally's party atmosphere is a huge part of the yearly gathering.

The rally has its fair share of contests and pageants for women, which are not to be confused with the pageants most people might think of. Some unofficial events at the rally consist of women riding around showing off their bikes and their bodies. Partial nudity at the rally events and particularly at the campgrounds is not uncommon. Although some of the campsites near Sturgis are quiet and secluded, most are known for their parties. Downtown Sturgis remains strict with its laws about indecent exposure, but many attendees push the limits of the law throughout the week.

Biker bars are also a big part of the rally culture. Most of them offer live music and a few even have burnout pits for some tire smoking fun. Some of the bars are large enough for bikers to ride their motorcycles into and most have various forms of entertainment, too. Almost all of the bars feature live music, and some, like the Full Throttle Saloon, have hosted professional performers like Lil Jon and Molly Hatchet, for instance [source: The Sturgis Rally Guide Book].

The rally boasts in its official guidebook a list of criminal statistics over the years: Emergency room visits, number of attendees put in jail, parking tickets and even calls to the local sheriff are among some the deviant behaviors listed. Each year, an average of $250,000 worth of bikes is stolen during the rally, and even though there are a fair number of misdemeanors, most of the arrests are for non-violent crimes.

The Sturgis Motorcycle Rally atmosphere is definitely not suitable for families, but there's a wide range of people who attend the event. Doctors, lawyers, hardcore bikers and those just looking for a good time are all drawn to the events and culture of Sturgis.

For more information about motorcycles and the Sturgis Motorcycle Rally, follow the links on the next page.

Can Popping a Wheelie Land You in Jail?
Are motorcycles really more dangerous than cars?
1931 Harley-Davidson Model D