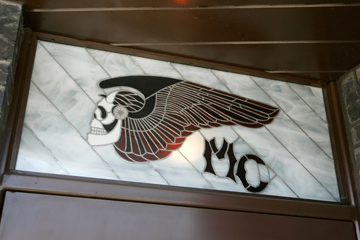 Image Gallery: Motorcycles A window with a Hells Angels emblem is seen at the Hells Angels clubhouse in Oakland, Calif., on March 29, 2007. See pictures of motorcycles.
AP Photo/Eric Risberg

For many motorists, it's instinctual to feel fear when a swarm of burly guys with tattoos come roaring into the rearview mirror on their loud, modified Harley-Davidson motorcycles.

Many people's assumption, right or wrong, is that the individuals belong to a motorcycle gang -- or club, as many of them prefer to be called -- and that they'll bust you up thoroughly if you so much as look at one of them the wrong way. The most famous of these clubs, or infamous depending on your point of view, is the Hells Angels Motorcycle Club. It's the one that created the model of the "outlaw" motorcycle group that we know today.

Its members are known by the public as being fearsome, short-tempered and often involved in criminal activity, despite efforts of local club chapters to perform good works in the community. Law enforcement keeps close tabs on the Hells Angels and other motorcycle-centered organizations -- police say the bikers often resort to murder to eliminate rivals who threaten their profitable criminal enterprises.

With a reputation firmly established in popular culture, the Hells Angels have developed a modern mythology around themselves that presents as many questions about the group as answers. Are the Hells Angels organized criminals or compassionate givers to charity and the community? What really goes on behind closed club meeting doors?

This article will examine those questions as we take a look at the history, rules, reputation and reach of the Hells Angels Motorcycle Club.