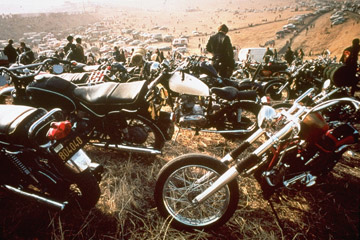 Motorcycles crowd the field at the infamous "Gimme Shelter" rock concert featuring the Rolling Stones. A fan was stabbed to death by a member of the Hells Angels motorcycle club on Dec. 8, 1969, at the Altamont Speedway in Livermore, Calif.
AP Photo

Law enforcement agencies around the world have alleged the Hells Angels are an organization steeped in crime and violence. Drugs, prostitution and intimidation are the group's stock and trade, according to authorities, and the members have the rap sheets to prove it:

In their book "Angels of Death: Inside the Bikers Empire of Crime," authors William Marsden and Julius Sher portray a Hells Angels in which members murder fellow motorcyclists, police officers and people minding their own business: "Not to mention the hundreds of thousands of lives ruined, brains fried, bodies withered by the methamphetamines, cocaine and other drugs pushed by the bikers. And yet while the body count kept mounting, Sonny Barger, the Californian patriarch and international leader of the Hells Angels, was being feted by the international media as he promoted his latest bestselling book" [source: Marsden and Sher].

Not surprisingly, the group holds the official position that it's persecuted by police and federal agencies because of its members' non-conformist lifestyles and beliefs.

Clubs hold rides for charity, such as the Toys for Tots donation program. On the main Hells Angels Web site, what the group collectively views as its plight is summed up in the phrase, "When we do right nobody remembers, when we do wrong nobody forgets."

So are the Hells Angels a bunch of glorified gangsters on two wheels, or just a fraternity of free-spirited guys who like to ride loud Harleys? Perhaps it's a little of both. And from their rough-and-tumble beginnings in post-World War II California, the Hells Angels have proliferated overseas. But just how extensively has the motorcycle club grown?