History of the Hells Angels 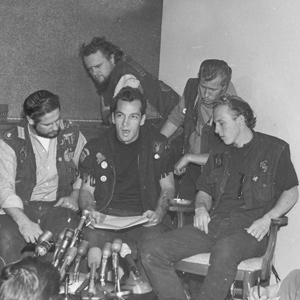 Ralph "Sonny" Barger (center), president of the Oakland chapter of the Hells Angels, reads a statement during a news conference in Oakland, Calif., on Nov. 19, 1965.
AP Photo

As best anyone can tell, the Hells Angels as we know it today got started in Fontana, Calif., in 1948 by Otto Freidli [source: James]. The modern-day club's precise origins remain somewhat of a mystery, as several motorcycle clubs with the name Hells Angels apparently sprang up in the postwar era in close proximity to one another. Motorcycles were cheap as war surplus items, and veterans returned from recently ended World War II were ripe recruits for the action promised by joining a group of drinking and cursing bikers.

The name "Hells Angels" comes from World War I and II fighter squadrons that played on the irony of the phrase. If you pay attention to punctuation rules, you may have noticed a missing apostrophe in the name of the motorcycle club. On the club's official site, the missing apostrophe is explained away as being intentional. The site claims that since there are many types of "hell," no apostrophe is needed. However, even if "Hells" is used in a plural sense, common rules regarding punctuation dictate it should at least end with an apostrophe. But it probably wouldn't be a good idea to quibble with a member over the issue if you met one in public.

Much of what we know about the group can be attributed to the works of Ralph "Sonny" Barger, a founding member of the Oakland, Calif., chapter of Hells Angels in 1957 and author of several books about his experiences.

Hollywood, always enchanted by stories of seductively dangerous individuals, began jumping in with films that romanticized the hooligan biker lifestyle. Movies such as "The Wild One," starring Marlon Brando in 1953, depicted law-defying motorcyclists as anti-establishment icons. These and other media images of free-spirited bikers spurred membership in the Hells Angels and a host of other biker clubs -- both law-abiding and not-so-law-abiding.