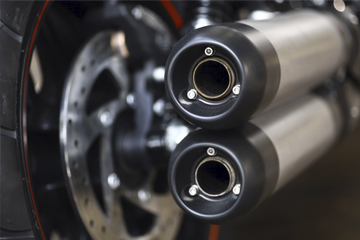 Loud pipes are a good way for your bike to get noticed, but you can also wear brightly covered safety gear.
bizoo_n/ThinkStock

"Loud pipes save lives." It's something motorcyclists like to say, a lot, in defense of the engine and exhaust noise generated by their large or modified bikes. Some find themselves asserting this defense extra frequently: Motorcycle noise — especially from Harley-Davidsons — is usually louder and more disruptive than car noise. But that is a feature, not a bug, many riders say — because the louder the bike, the more likely it is to be noticed by other drivers on the road. And, bikers add, engine and exhaust noise is more effective than horns. It's a steady sound, whereas a sudden beep can distract car drivers and cause them to swerve or drift into the motorcyclist's lane.

Whether loud pipes actually save lives is a point that's still hotly debated. There isn't any hard data to support either side, so it becomes a battle of anecdotes. It seems like every experienced motorcyclist has a story about a time he or she almost got hit, before the other driver noticed them just in time. Homeowners are ready to counter with stories about being woken up at night by loud motorcycles.

The law, when it gets involved, tends to come down against loud pipes. New bikes come from the factory with exhaust systems that meet noise ordinances, and some states have laws that make it illegal to modify a motorcycle's exhaust system to make it louder. However, some police have admitted they rarely pull over a bike purely to enforce a noise ordinance; more often, they use a motorcycle's loud noise as an excuse to do crowd control or sobriety checks. And in California, the Oakland Police Department made the pipes on its own patrol motorcycles louder, after an officer was hit by a car whose driver said he hadn't heard the bike coming [source: Barrett].

The U.S. National Highway Traffic Safety Administration may be siding with motorcyclists. As electric vehicles become more popular, the agency was assessing whether noise should be added to increase attention. The NHTSA worried that silent electric motorcycles and other vehicles would go unnoticed in traffic. Granted, the agency was clear it worried more about the risk to pedestrians than to the rider operating the motorcycle, but the point remains: the agency agreed that vehicles that cannot be heard are dangerous [source: Edge]. (In 2015, the agency's new noise standards were still in the works.)

In the interest of safety, it's worth noting that there's more than one way to get noticed. Wearing brightly colored safety gear and using lights are two other ways to improve a motorcyclist's visibility.

10 Notorious Motorcycle Gangs
Behind the Scenes at Supercross
Can Popping a Wheelie Land You in Jail?