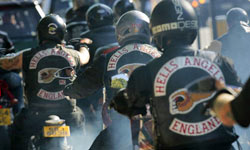 Outlaw motorcycle gangs (OMGs) got their start in the 1940s and '50s as spinoffs of more mainstream motorcycle clubs. After World War II, motorcycling began to spread in popularity as a hobby. Veterans settling into lives in the suburbs working average jobs wanted to get a taste of the more adrenaline-charged life they'd lived overseas. Riding along the country's highways with friends -- partying and often drinking -- was a perfect way to do that [source: Dulaney].

The outlaw groups began to develop after a 1947 bike rally in Hollister, Calif., that erupted into a riot. According to reports, drunken bikers rode through town (even in and out of buildings and restaurants) causing trouble and destroying property [source: Thompson]. Journalists and historians have since claimed that Hollister was not the all-out chaos portrayed in the media. Still, during a widespread public outcry over Hollister, and the danger of motorcycle clubs, the American Motorcycle Association released a statement aimed at calming the public. Ninety-nine percent of motorcycle clubs were law-abiding, fun-loving citizens, the AMA said. It was the other 1 percent that caused all the trouble and got all the attention [source: Serwer].

Over the years, as certain clubs began to drift toward illegal activity, they claimed the moniker "1 percenter" as a badge of honor. Even today, most of these "outlaw motorcycle gangs" maintain that they aren't criminal organizations. For example, famous Hells Angels founder "Sonny" Barger claims that while some Angels may deal drugs or commit acts of violence, the organization itself doesn't endorse those activities [source: Serwer]. Still, law enforcement agencies from the U.S. and Canada to even Australia and Europe see the OMGs as a serious threat. The FBI considers the gangs organized crime syndicates whose drug dealing and turf wars put rival gangs and the public in danger.

Read on to find out which motorcycle gangs are among the most dangerous and notorious.