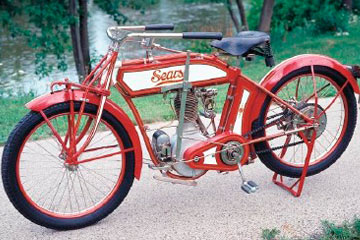 For an entire century, from 1893 to 1993, Sears Roebuck & Company's iconic catalog offered Americans just about anything they could possibly want, from watches and jewelry to buggies, electronics and firearms [source: Sears]. It should come as no surprise, then, that the catalog -- which was originally penned by Richard Sears alone, who drew on his personal experiences in describing his wares -- also featured motorcycles.

According to Arlene May of Sears Holdings' Historical Archives, the catalog began offering the "Sear Auto-Cycle" for $169 in 1909. "This same catalog also urged readers to send for the free motorcycle circular giving a larger selection of cycles and supplies," May says.

The catalog stopped offering motorcycles in the spring of 1914, opting only to make clothing and motorcycle supplies available until the early 1950s. In 1951 the catalog gave customers the option to purchase the Allstate motor scooter and in 1954 the pages of the catalog also included a new Allstate motorcycle, as well.

These days, as with everything else once emblazoning the pages of the Sears catalog, customers have to do their shopping online or at a dealer.

Can Popping a Wheelie Land You in Jail?
Which Is More Dangerous: Motorcycles or Cars?
Do loud pipes really save lives?