How does a frame slider prevent damage during a crash? 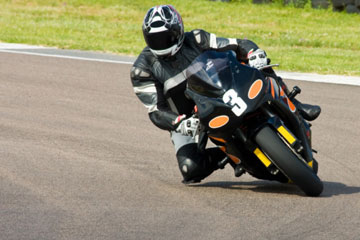 Often, riding a motorcycle comes down to physics. Essentially, what we call "momentum" includes both the speed and the mass of the thing that's moving. In a collision, we measure the change in momentum to show how much force is acting on the thing that's moving -- you and your bike -- to see what kind of damage will result. The force generated in a collision equals this momentum change, divided by how long the collision takes.

First, a slider puck is designed to burn up or break off, which takes on a lot of the impact before the flat side of your bike -- the engine block, or parts of your fairing, depending on design -- even touches the ground. You'll lose the puck, of course, but they're a lot less expensive than buying or even repainting your fairings, and they're designed that way on purpose. Second, a frame slider absorbs a lot of the shock of the collision and then distributes the force more evenly throughout the frame, in the same way that slapping a window is a lot less dangerous than punching it.

Those effects help not only in situations where the bike just drops -- perhaps you forgot the kickstand, or misjudged and stepped off into a pothole -- but also when the bike itself is traveling and flips or falls over. The latter situation is where the frame slider gets its name: Those smallish nubs of nylon attached to your bike's body actually help the machine slide to a stop more slowly.

In this situation, the enemy is friction. Friction is generated when an object moving along one vector is brought into contact with something else on a different vector. In the case of a slide -- whether we're talking about a motorcycle accident or an air hockey puck -- think of it this way: The object that was just moving forward wants to continue moving forward, while gravity wants to bring it downward.

So how does a frame slider help solve this problem, while keeping your bike's engine and frame safe?

The Physics & Function of Frame Sliders

Normally, when you're riding your bike, the downward vector of gravity on either side of you cancels itself out, because you're balancing while you ride. But when you tip one way or the other, that downward pull becomes much more important than your forward motion, and you fall down. That can hurt your body, which is why we wear our pads and helmets, but if you think about how momentum works, you can see that the force acting on your motorcycle is even more intense: Your mass is nothing compared to the bike's, so your momentum is that much less.

It's the action of these two vectors -- the friction between your momentum and gravity -- that grinds your bike against the road, until the forward motion finally comes to a stop. The vectors are using the physical material of your bike to work out a simple physics problem about which one of them will win. The slower you're going when this happens, the less damage will be done, because the vectors will equal themselves out more quickly.

Likewise, the longer the process takes, the safer your bike will be. Imagine dropping a dinner glass onto the ground, versus skipping it down your driveway. Those bounces represent sudden sharp adjustments to this vector ratio, and while they're dangerous, they certainly don't create as much friction -- or as much downward force -- as simply dropping the glass. But if you imagine rolling or sliding the glass, you can easily see how the danger is comparatively minimal.

What a frame slider does is help prolong the process this same way, through destroying the puck and absorbing the force as designed, but also by lubricating your bike's contact with the road and distributing the force of impact outward to the rest of the frame. In all cases, the physics remain the same: Your frame slider is lessening the friction between the two vectors and keeping the sensitive mechanics inside your engine from being ground against the road.

For more great motorcycle articles, check out the links on the next page.