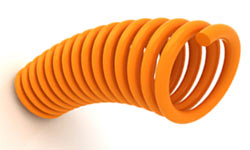 Force, power, torque and energy -- what do these words really mean, and are they interchangeable?
©istockphoto.com/AndrewJohnson

If you've read many HowStuffWorks articles, you've seen a lot of terminology thrown around -- words such as mass, force, torque, work, power and energy. What do the­se words really mean, and are they interchangeable?

In this article, we will help to bring all of this terminology together, give some examples of when each is used and even try a few calculations along the way to get the hang of it.

Throughout this article, we will refer to different types of units. In most of the world, the International System of Units (SI - from the French Le Système International d'Unités), also referred to as the metric system, is accepted as the standard set of units. This system contains most of the metric units you are used to, like meters and kilograms, but also includes units for many other physical and engineering properties. Even the United States has officially adopted the SI system of units, but English Engineering Units (like pounds and feet) are still in everyday use. Before we jump into explaining these terms, we need to start with some basics. We'll start with mass, and work our way up to energy.