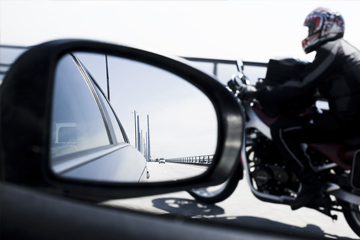 There's a reason besides looking good that motorcyclists gear up in leather and Kevlar before hitting the road. They know what safety data backs up: Besides keeping riders comfortable in the elements, wearing proper riding gear every time — especially helmets — will improve the chances of surviving an accident [source: National Highway Traffic Safety Administration].

Even so, compared with people driving cars, motorcycle drivers face a much higher risk of dying in a crash: U.S. government data from 2013 show that for every mile traveled that year, the number of motorcycle-related deaths was 26 times the number of car-related deaths [source: Insurance Institute for Highway Safety], with a total of 4,381 motorcycle fatalities.

Cars and motorcycles share some similarities. They drive on the same roads, they can be equally powerful, and they both can travel fast. But motorcycles have a few major differences that make them inherently more dangerous.

Any motorcyclist will be quick to tell you skill and smarts are key to staying alive and in one piece. And the statistics don't sort out irresponsible motorcyclists from responsible ones. But all motorcyclists start out with some disadvantages. Because they have two wheels instead of four, the driver's balance and driving abilities — including quick reflexes — play a more critical role. And a motorcyclist rides out in the open, rather than inside the steel cage of a car frame. The resulting sense of freedom makes motorcycles so appealing to so many people, but it also comes with risk. And because motorcycles are more difficult to see than cars, they're more likely to be hit by other drivers. Without a car's structural protection, a motorcycle rider involved in a crash is more likely to suffer serious or fatal injuries.

Meanwhile, even as automotive manufacturers develop new technology to make cars even safer, motorcycle manufacturers have fewer options. Motorcycle features such as mirrors with larger fields of view, brighter headlights and motorcycle airbags can help reduce risk of a crash or the severity of an injury. But in general, motorcycles aren't marketed as safer than the previous year's model or the competitor's model, and they lack the technology-driven safety features available in new cars. Motorcycle drivers don't have time to check out a rear-view camera, for example. Motorcyclists can't afford to be distracted by a lane-departure warning.

Just sitting on a motorcycle demands skill and alert driving. But motorcycle drivers face dangers out of their control — and they accept that risk every time they mount a bike.

10 Notorious Motorcycle Gangs
Do loud pipes really save lives?
How the Hyanide Works