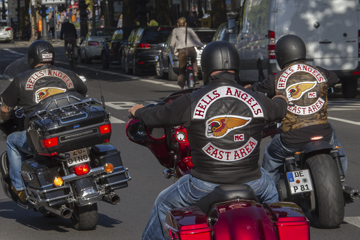 Although the Hell Angels are a well-known outlaw motorcycle club, they were not the first.
Olaf Wagner/ullstein bild via Getty Images

The Hells Angels are the best-known and biggest outlaw motorcycle club in the United States and Canada, but they're not the oldest biker gang around. That honor goes to the appropriately named Outlaw Motorcycle Club. The Outlaws are known to be particularly violent, and they operate by the motto "God forgives, Outlaws don't." The group started in 1935 in a bar near Chicago. Though the Outlaws were based in the Chicago suburbs for their first 15 years, membership grew in the city, and the club eventually moved its home base to Chicago proper.

The club's notoriety grew in the 1960s, when the AMA banned club insignia at races and other AMA-sponsored events. As the club grew and established new chapters, its rivalry with the Hells Angels grew stronger as they fought for control of the United States' borders with Canada and Mexico. Today, the Outlaws are believed to have about 1,700 members across the East and the Central United States, made mostly of local Outlaw chapters spreading outward from the Great Lakes region.