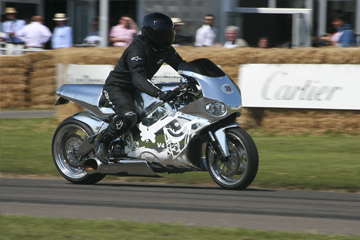 The MTT Turbine Streetfighter is one of the fastest motorcycles in the world.
Supermac1961/Wikimedia

Need to get there faster? Consider one of these record-busting motorcycles. Just don't tell highway patrol we sent you.

Two of the fastest motorcycles in the world come from a company that normally makes jet turbine engines. MTT stands for Marine Turbine Technologies, a Louisiana-based turbine manufacturer.

The MTT Turbine Y2K Superbike, introduced in 1998 and discontinued in 2005, has some pretty impressive specs. It offers 320 horsepower and 425 pounds-foot (lb-ft) of torque from its jet turbine engine, and its top recorded speed — achieved on an airport runway — is 227 mph [source: Tsantilas].

Another of MTT's models, the Turbine Streetfighter, offers the same engine as the Y2K superbike, but an optional upgrade boosts the approximate horsepower and torque numbers to 542 and 450, respectively. And that's good for at least 233.7 mph, based on its best recorded run so far. But bad news for those in the market: This bike will probably never be sold. Even though it's road legal, the manufacturer thinks it's too fast for most people to ride. The Turbine Streetfighter was completed in 2014 after the frame was torn down and redesigned to cope with the engine's power, and its speed record was achieved in May 2015 [source: Tsantilas].

Another contender: the Electric Lightning LS-218, a fully electric motorcycle. Although its power and speed fall a bit short of the pair from MTT, the Electric Lightning LS-218 actually can be purchased, a strong point in its favor. It can also hit 60 mph in two seconds flat, another point in its favor. Best yet? Since it's electric, it's environmentally friendly and much more efficient than it would be powered by gas. The LS-218 offers 200 horsepower, 168 lb-ft of torque and a published top speed of 218 mph (as referenced in the model name) — although the manufacturer thinks it can be pushed even faster. The LS-218 uses a direct-drive system, which eschews the clutch and transmission in favor of sending power directly to the ground. The twist-and-go style means it accelerates very fast and sacrifices less power to drivetrain loss.

Finally, consider the Kawasaki Ninja H2, which Gizmag says is the fastest accelerating motorcycle ever [source: Hanlon]. It's a supercharged road-worthy version of a previous track-only version of the Ninja. Kawasaki's keeping the Ninja H2's top speed close to the vest, but with 200 horsepower, it likely falls short of our aforementioned contenders.