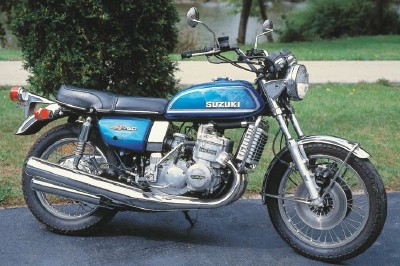 The 1975 Suzuki GT750 was a water-cooled two-stroke with good performance, but poorer sales than its two-stroke Kawasaki rivals. See more motorcycle pictures.

The 1975 Suzuki GT750 motorcycle well represented a major change Suzuki had made to its bikes several years earlier.

Long a producer of small- and medium- displacement two-stroke street bikes, Suzuki went out on a technological limb in 1971 and introduced the GT750. It became known as the "Water Buffalo" due to its large-displacement water-cooled two-stroke engine.

Two-strokes had been used on and off since the turn of the century, but were usually singles or twins of 250 cc or less. Racing motorcycles were the usual recipients of two-strokes due to their light weight and high, but narrow, power band.

Suzuki brought out the Titan in the mid-1960s, a 500-cc twin that was probably the largest two-stroke street bike to achieve any kind of popularity up to that time.

Being water cooled, the 1975 Suzuki GT750 motorcycle had a sizable radiator bolted to the front chassis downtubes. The engine's water jacket kept it cool and helped to reduce noise.

The three-cylinder engine dumped its spent exhaust into four separate pipes, each with a full-length megaphone that was made up of two halves joined by a visible seam.

Despite all the technology, the GT750 was overshadowed by Kawasaki's two-stroke triples, which weren't water-cooled but were considerably quicker.

Nevertheless, the Water Buffalo sold fairly well and continued until 1977, when it was replaced by a "conventional" four-cylinder four-stroke.

For more pictures of the 1975 Suzuki GT750 motorcycle, go to the next page. 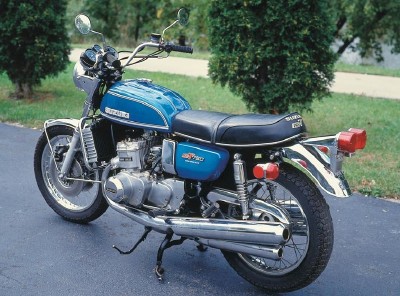 The radiator mounted ahead of the engine easily identified the 1975 Suzuki GT750 as liquid-cooled.

The water-cooled engine required a coolant-temperature gauge, and it was mounted between the speedometer on the left and the tachometer on the right.
Exhaust from the three-cylinder engine routed through a "three-into-four" arrangement with the center cylinder split between two smaller mufflers.