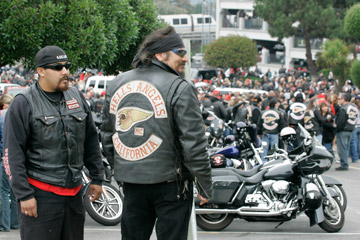 A pair of Hells Angels members look on as crowds jam a funeral home parking lot during the memorial for the Hells Angels San Francisco chapter leader in Daly City, Calif., on Sept. 15, 2008.
AP Photo/Eric Risberg

Like many exclusive organizations, the Hells Angels maintain a great deal of secrecy involving the inner workings of their group. But enough has been written by members and observers to give a basic idea of what's required to join. Officially, you must:

Given the group's alliance with groups like the Aryan Brotherhood, and its fondness for Nazi symbolism, members also must be white. The road to full membership has several phases and can last years:

Hang-around: A status that allows a prospective member to attend some club events.

Associate: If members take an interest in a Hang-around, Associate status might be offered.

Prospect: This status is full-acknowledgement that an individual is in the pipeline for consideration. The person may participate in club activities but has no club voting privileges.

Full member or Full-patch: Successful prospects graduate to this status. Full-Patch, or being "patched" refers to the fact that the member now has the right to wear all the sanctioned jacket patches, including the Hells Angel "death head" logo, the words "Hells Angels" on the top patch panel (called a rocker), and the club location on the lower rocker.

Among themselves, members refer to the organization as simply "HAMC" and often reference the number "81" in various contexts. The letter "h" is the eighth number in the alphabet and "a" is the first -- shorthand for "Hells Angels" [source: Hells Angels Motorcycle Club World].

The Hells Angels are known by law-enforcement officials across the globe as an "outlaw" biker gang. Members prefer to call themselves a "motorcycle club." But are the Hells Angels really as dangerous as their reputation?