by Matt Sailor
NEXT PAGE 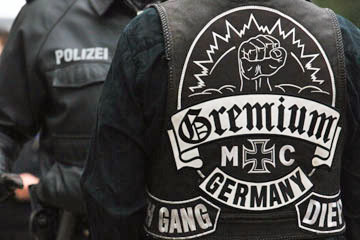 Image Gallery: Motorcycles Members of the MC Gremium motorcycle gang in Germany wear their motorcycle colors to show their affiliation with the gang. See pictures of motorcycles.
AsiaPac/Getty Images

You're driving down a long stretch of highway on a clear summer day, when you hear the sound of distant rumbling. It's not a pop-up thunderstorm, but a posse of a few dozen bikers, coming up behind you in the rearview. But how do you know if you're dealing with a group of weekend warriors blowing off steam between shifts at the office, or with a show of force by a motorcycle gang like the Hells Angels? One way is by looking at the "colors" that the bikers have sewn to the backs of their leather or denim jackets.

In the wake of a small 1947 riot involving bikers at a Hollister, Calif., rally, the American Motorcyclist Association released a now-famous statement. Ninety-nine percent of motorcycle enthusiasts were average citizens having a bit of fun, the AMA said. Only a small 1 percent was responsible for problems like what happened at Hollister. Once these "outlaw motorcycle gangs" (OMGs) began forming over the following decades, they embraced the 1 percent label, and began calling themselves "1 percenters" and wearing a diamond-shaped patch that said "1%" usually on their jacket lapels [source: Thompson]. The "1%" patch was one of the earlier forms of motorcycle club colors -- elaborate sets of patches and designs that bikers wear to make their affiliation with one club clear.

Before Hollister, the original outlaw motorcycle gang, the Outlaw Motorcycle Club, wore patches on the backs of their workman's coveralls as far back as the 1930s. These were not the elaborate designs that clubs use today, but simpler patches with the club name [source: Dulaney]. Over time, the patches began to evolve. The Outlaws, taking a cue from a Marlon Brando movie, started wearing a logo they called "Charlie," a skull and crossbones design with the crossbones replaced by pistons [source: Dulaney]. From there, colors became more and more commonplace among biker clubs.

Today, club colors are powerful symbols of OMG identity, a way to brag about affiliation and warn rivals to keep their distance. Recreational clubs that don't engage in criminal activity often have their own versions of colors, too. But this article will focus on the outlaw gangs, and how they use them. Read on to learn more about how motorcycle clubs use their colors to keep control of their territory, keep members in line and intimidate their enemies.