What do the symbols mean? 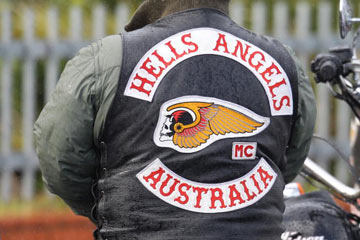 Club colors themselves can be extremely intricate and detailed. If you look at the back of an OMG member's jacket, you'll see three (sometimes four) patches highlighting:

Logos or emblems are the primary symbol of the club, and are probably what most people picture in their head when they think of colors. These are the colorful and sometimes-frightening patches usually depicting a monstrous or demonic figure. The Hells Angels' famous emblem is a skull with wings, wearing a motorcycle helmet [source: Thompson]. The Outlaws have "Charlie," the grinning skull with crossed pistons [source: Serwer]. The Vagos MC use an image of Loki, the Norse god of mischief [source: Hume]. The Pagan's symbol is a colorful fire god invented by one of its founders [source: Peirce]. Usually, colors are meant to project a fearsome image, but, there are some exceptions. For example, the Bandidos' logo, according to legend, is based on Fritos' Bandito mascot. In Australia, the logo of the Finks is a grinning court jester holding a bottle of beer underneath his bulbous red nose.

Colors also frequently contain some sort of motto or slogan. The "MC" contained in many OMGs' colors simply stands for "motorcycle club." The Pagans' colors have the initials GFPD, which stands for "God Forgives, Pagan's Don't" [source: Peirce]. Bikers also wear smaller patches around the colors, or on the sleeves or lapels of their jackets to represent various accomplishments or ideals. Although, these might seem like dubious distinctions to some people. A patch with the number "13" shows that a biker likes to smoke marijuana [source: Thompson]. (M is the 13th letter of the alphabet.) Different colored wings supposedly represent various sex acts the biker has performed. However, according to some writers, that association is actually based on rumors spread by bikers to gullible journalists [source: Thompson].

Colors are so important to the identity of the outlaw motorcycle gangs, that some of the larger clubs like the Hells Angels, Mongols and Outlaws have actually filed and received copyright protection for their colors. For example, the word Mongols written in an arch in sans serif type is trademarked by the gang. Or at least it was until 2009, when U.S. prosecutors successfully filed suit to have the Mongols' copyright revoked, a serious blow to the group's morale [source: Goldman]. That case proved what bikers already knew, that colors are the most important symbol a gang has of their identity.