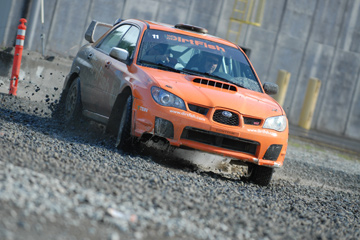 Note that the DirtFish instructor in the passenger seat is pointing out to the driver where to look and where his hands should follow to steer the car out of the skid. Whooping as you do it is optional, but encouraged.
Sean McDonogh/DirtFishRally School

It's snowing. It's raining. It's doing both at the same time. Someone put dish soap on the road. The tanker truck that just wrecked in front of you was filled with melted butter. All you want to do is get home and out of the snow/rain/dish soap/butter before "Community" comes on.

So you go a bit faster than conditions require. You push it at the yellow light, because it's safer to keep going around that turn than to suddenly stop, right? Stopping is like asking the guy behind you to please, if he wouldn't mind, ram his front bumper into your rear bumper so the two of you can hang out by the curb over there and exchange insurance information. Maybe he stopped at the store and has a loaf of bread in the car, which you can use to help sop up the melted butter slathering the street?

This is how most of us normal drivers end up in a skid -- going around a corner too fast for conditions. Too much power, not enough traction. If you're a stunt driver, you yell "Yeee-haw!" and swing your vintage muscle car around the corner anyway. Or if you're an action hero, you make a pun about the mess in the street: "This butter be good," for instance.

But if you're the average driver, you want to get out of that skid, and fast. You want traction, you want the ability to control the car, and you want to avoid hitting anything while you regain control. These are reasonable things to want, and there are very reasonable ways to get them. And though the next few pages will detail very specific slides and vehicles, the technique for getting out of a skid is the same no matter what you're driving -- front-wheel drive, rear-wheel drive, all-wheel drive, manual, stick shift, motorcycle -- anything.

No one skids like a rally car driver. Travis Pastrana, Ken Block, all those crazy Finnish guys who seem to have been born on frozen lakes -- they send the back end of those rally cars sliding around corners on purpose. Bonus points if they can get a rooster tail of mud, water, or snow to fly up behind them.

But even in a rally car, if that skid keeps going forever, the car is just going to go around in a circle and probably slam into a tree. That's a terrible strategy for winning races. Rally drivers have to be able to get their cars out of the skids they create.

Forest Duplessis is the head instructor at DirtFish Rally School in Snoqualmie, Wash. We've all heard that you should "steer into the skid," which Duplessis says sounds simple, but the problem is that people turn the wrong way.

Say you're going around a turn to the right, and your back end starts to come around too far. This is called oversteer,by the way. The nose of your car is now pointed too far to the right, right? What you need to do is countersteer to bring the car back to the direction you were trying to go in the first place. In this case, you need to point the car a bit to the left to keep it in the street and not on the sidewalk.

Duplessis says the first step is to look where you want to go, and then make sure your hands agree with your eyes. If you need to make a little adjustment to the left, as in our example, then look a little to the left, where you would like your car to be. "The movement is quick and smooth," Duplessis notes. "It's smaller than most people would think."

Of course, being a rally instructor, Duplessis also says "the more you get comfortable with it, the more you learn to appreciate oversteer." Rally drivers work to apply the right amount of turn with the right amount of correction to keep the car in a state of controlled chaos while they basically steer with the rear of the car. As Duplessis says, "Embrace the slide." 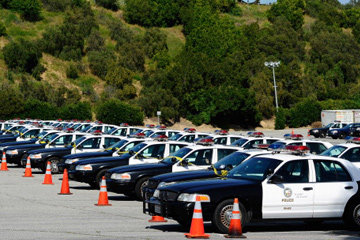 The Terror of a Two-wheeled Skid

Now that you're an expert on steering out of a skid, we're going to take away two of your wheels. This, according to Ray Pierce of the Team Oregon Motorcycle Safety Program, is a whole different ballgame.

First of all, a rear-wheel skid in a single-track vehicle (which is what motorcycles and scooters are) usually happens because the rider is using too much rear brake around a turn, not because of a slippery surface. Second, a single-track vehicle in a skid has no steering control and no direction. Your job as rider is to get the wheels back into alignment.

Imagine you're looking at a bike travelling along the street from high above. You're in, say, a hot air balloon. A turn is coming up, and the rider pulls too hard on the rear brake lever. The front wheel rolls straight ahead, but the rear wheel -- the one with the brake acting on it -- follows the line it was on. The bike is leaned a bit for balance, so the rear wheel "steps out on the high side," to use Pierce's words, which sound a bit like an old-timey dance move. What he means is that the rear wheel is out of alignment with the front wheel on the outside of the turn.

Just like with a car, you steer into the skid in an attempt to bring the wheels back in agreement. Release the rear brake to let the back tire roll and don't reapply it until you've got traction. Even then, you'll want to squeeze that brake lever gently. If the bike straightens up too quickly, the rider can be spit out of the saddle. That, says Pierce, is the worst-case scenario.

Pierce says he spends a lot of time teaching riders how not to get into a skid in the first place -- the best-case scenario. He remembered getting into a skid himself on a go-kart track not long ago (proof that even the pros make mistakes) and he didn't move anything on the bike. He just hoped the rear end stayed underneath him while he brought it back to upright. "There was a lot of praying," he says.

What's the Point of Car Alarms If Nobody Calls the Cops?
Top 10 Causes of Car Fires
Car Seats: Fast Facts