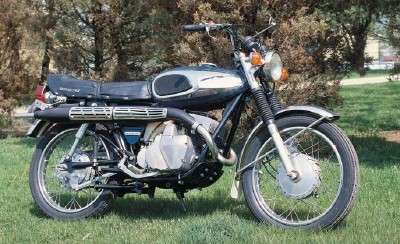 While the name "Bridgestone" is associated with tires today, during the 1960s, this Japanese company dabbled in motorcycles, including the rare 1967 Bridgestone 350 GTO motorcycle.

Bridgestone was synonymous with "performance" in motorcycle circles -- though that really wasn't the company's original aim. When Honda began enjoying success in the U.S. with 50-cc scooters, Bridgestone jumped on the bandwagon with a similar model originally sold through Sears and Montgomery Wards stores.

The company then expanded into true motorcycles, the first being a hot 175-cc two-stroke twin that could embarrass many 350s. Then Bridgestone came out with a 350 of its own, which could likewise dust bikes twice its size.

Introduced in the mid 1960s, the 350 GTR used racing-technology rotary disc valves in the crank-case to help get 40 horsepower from a mere 21 cubic inches.

That, combined with light weight and a 6-speed transmission, allowed the GTR to turn high 13s in the quarter-mile when most British 650 twins were running mid 14s.

A "scrambler" version of the GTR followed, earning its on/off-road status with little more than a high-mounted exhaust pipe -- which hardly a true scrambler made. And though the new GTO shared the GTR's virtues, few were sold, making featured model here rare indeed.

For reasons that have never been explained, Bridgestone suddenly halted motorcycle production in the late 1960s.

Some rumors had it that other Japanese motorcycle manufacturers, which purchased millions of tires from Bridgestone, convinced the company that its continued efforts at building competing bikes might jeopardize its much more profitable tire business.

Whatever the reason, Bridgestone pulled out of the bike business to focus on tires.

Go to the next page for more pictures of the 1967 Bridgestone 350 GTO motorcycle. 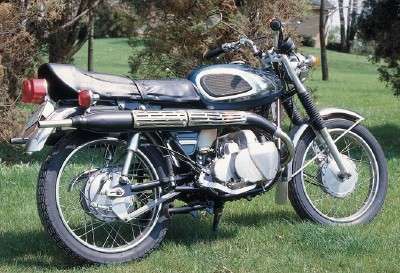 A "kickup" rear seat was a Bridgestone signature.

Racing knowhow got 40 horsepower from 21 cubes.
A 8000-rpm redline was modest give the GTO's power.
A tool box nestles betwixt exhaust pipe and turn signal.