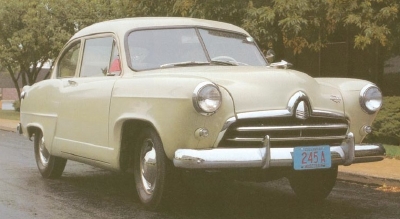 The 1952-1953 Allstate was an odd car that is remembered today (if it's remembered at all) for being Sears, Roebuck & Company's misguided attempt at entering the auto market.

Sears usually goes to great lengths to hide the origin of proprietary products -- those built by some other famous company but wearing a Sears brand. But there was no disguising the origins of the Allstate. It was, of course, the Sears version of Kaiser-Frazer's compact Henry J.

Most people, however, got their first look at it in the ubiquitous Sears catalog, and many never actually saw a real one. With a total production run of about 2,400 units, Allstates weren't exactly the most common automobiles on the road.

Theodore V. Houser, a Sears executive who also owned some Kaiser-Frazer stock, had been asking Henry Kaiser to build Sears a car since the west coast construction tycoon had entered the auto business in 1945. (This was not the first attempt by Sears to produce cars: a pretty little high-wheeler had carried the Sears name back in 1912.)

Houser and Kaiser had earlier collaborated when the latter's steel mills produced pots and pans for Sears' kitchenware department. Design renderings of early, slab-sided Kaiser-Frazer sedans with Allstate labels were completed, but nothing came of the idea until Kaiser-Frazer produced the Henry J, announced in early 1950 as a 1951 model.

The Henry J looked ideal to Sears because of its middle-class, economy-minded clientele, and Henry Kaiser agreed to produce a version for Sears. This decision caused dismay within the Kaiser-Frazer dealer organization, which fretted about competition from the giant department store and catalog merchandiser.

Henry's son Edgar, Kaiser-Frazer's president, was sent to mollify the dealers: Allstates would be produced in small quantities, he told them, and would be marketed mainly on a test basis in the southeast part of the country (where Kaiser-Frazer's dealer network was notably sparse). The dealers remained unconvinced. As things turned out, Edgar was right.

Go to the next page to read about the Allstate's styling and sales success (or lack thereof).