What are the benefits of crossover vehicle design? 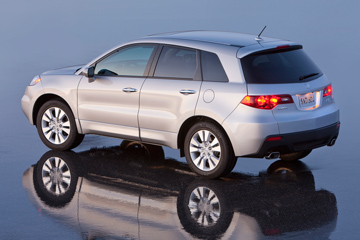 The 2011 Acura RDX
Courtesy of Acura

Like the kid in "Poltergeist" said, "they're heeeereee." But we're not talking about angry spirits. We're talking about crossovers.

Don't feel badly if you haven't heard of them. Crossover is a relatively new automotive term. A crossover (or a crossover SUV, as they're sometimes called) is a vehicle that has the body and space of an SUV, but the underpinnings of a car. They've taken over the parts of the automotive market that used to belong to SUVs alone and become the go-to car for many American families. Even though crossovers are now driving the market, you might be wondering why car companies decided to fuse rough-and-tumble SUV looks with car-based mechanicals.

As it turns out, there are a number of benefits to a crossover vehicle design. With a crossover, you get an upright seating position, which can improve outward visibility. You also get lots of interior space, and usually pretty good crash protection. Of course, SUVs provide all those things, too. But SUVs have a few downsides: Because SUVs tend to ride on truck-based platforms, they're heavy. That extra weight can make SUVs tough to stop, and it makes them have less-than-stellar fuel economy ratings. SUVs also have substantial suspensions built for off-road driving. On the road, however, those same suspensions can feel rough and uncomfortable. Finally, with their tall stances, SUVs can be tippy and, in general, a little tough to drive.

By using a car-based platform, crossovers avoid those shortcomings, while keeping many of the things -- like practicality, passenger space and rugged styling -- that people like about SUVs. While crossovers are heavier than most cars, they tend to be lighter than SUVs. That helps them get better gas mileage. Also, with their car underpinnings, crossovers drive more like a car than SUVs do. In fact, once you get behind the wheel of a crossover you might feel like you're piloting a tall station wagon. Their car-based platforms help make crossovers much more maneuverable in the city and in tight parking lots -- something that can be tough in an SUV. Crossovers also tend to have smoother rides and better handling than SUVs do, making them comfortable enough for commuting. Of course, to get all this you give up the ability to tackle harsh off-road trails or tow heavy loads -- but as soaring crossover sales show, many car shoppers are willing to make the tradeoff.

For more information about crossover vehicles and SUVs, follow the links on the next page.

Could Electric Motor Conversions Save Classic Cars?
Henry Ford vs. the Dodge Brothers: An All-American Feud
How Excalibur Cars Work