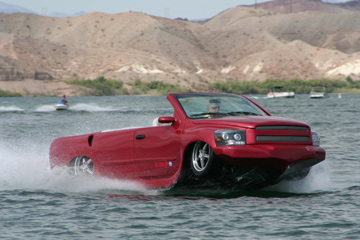 For car builder and designer Dave March, getting a 14-foot (4.3-meter) car safely up to 52 miles per hour (45.2 knots) on the water was physically impossible -- at least with the model he started with. The V-hull needed too much power to push through the waves. It was a matter of displacement and the original car design which just didn't perform like he wanted. He wanted speed and performance.

Yes, you read correctly. March, who cut his teeth in the California car business in the mid-1970s, experimented with the oft-laughed-at amphibious car, and has recently taken it to a new level. In the WaterCar Python, March's latest creation, he's taken a convertible roadster of uncertain pedigree, designed in a few tweaks and can now take it up on plane and clock more than 60 miles per hour (52 knots) over the waves. And that's after scorching the roads to the lake shore at a top speed of more than 125 miles per hour (201.2 kilometers per hour), a 12-second quarter-mile time, and 0 to 60 in less than five seconds.

"His idea is if he sees something, he wants to take it to the next level," said WaterCar company spokesman Fred Selby. "He's always been attracted to challenges."

The Python is no Amphicar, that steady-but-slow typical vintage entrant in July 4th lake parades across the country. And with a General Motors LS1 to LS9 engine under the hood, it just may give Virgin Atlantic CEO Richard Branson's 2004 record-setting run across the English Channel in an English Gibbs Aquada a run for its money. That is, if it takes to foreign shores as well as domestic. And while the economy may have a say in whether the Python will be a lakeside fixture -- the rolling chassis (sans engine and transmission) sells for about $170,000 -- the allure of this unique vehicle already has people talking.

While still in the evolutionary phases with design tweaks and improvements yet to be made, the Python could raise the amphibious car status from a curiosity to a capable machine.

Keep reading to find out what makes the WaterCar Python a good amphibious vehicle. 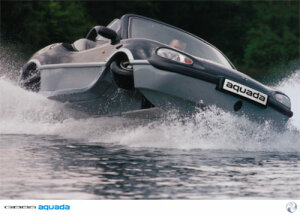 How the Gibbs Aquada Works 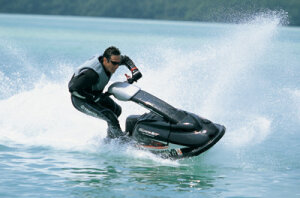