Have automakers tried crossover vehicles in the past? 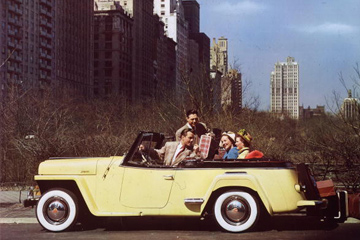 Crossover sport utility vehicles are among the hottest selling vehicles on the market today, and for good reason. They offer the ride height and roominess of a traditional SUV, and often have a better ride quality and superior fuel economy.

They're called crossovers because they're usually built on car (or car-like) platforms, not truck platforms -- think of them as tall station wagons or hatchbacks. These attributes have proved very popular with buyers. Crossovers accounted for nearly a quarter of all vehicle sales in 2010 [source: Koba].

But while crossovers have become sales leaders fairly recently, the vehicles themselves aren't an entirely novel idea. There's no truly strict definition of a crossover, so many early two-wheel and four-wheel-drive wagons and SUVs can fit into that category. (For those who want to get technical, nearly all crossovers use unibody construction, while truck-based SUVs are built with body-on-frame construction.)

Arguably, the first crossover goes back to just after World War II when the company that would become Jeep, Willys-Overland Motors, released a vehicle called the Jeepster. The Jeepster was a two-wheel-drive convertible coupe that was designed to appeal to people who might be turned off by the utilitarian qualities of other Jeep vehicles. The car-like vehicle didn't sell all that well, and was discontinued after three years [source: American Jeepster Club].

Another Jeep that could be considered a crossover was the tough and popular Jeep Wagoneer, which featured a station-wagon body atop a four-wheel-drive Jeep chassis. That car was made for almost 30 years.

Skipping ahead to the 1980s, we can find a more direct precursor to today's crossover SUVs in the AMC Eagle. Imagine a typical 80s station wagon with huge tires and big ground clearance and you have the Eagle in a nutshell. But it also boasted all-wheel-drive, which allowed the wagon to go anywhere and handle just about any weather [source: AOL Autos]. However, the time just wasn't right for those kinds of vehicles -- yet.

It was the 1990s that made SUVs truly popular in America, with truck-based sport utilities like the Ford Explorer became big sellers. Car-based vehicles like the Toyota RAV4 and the Honda CR-V (both based on compact cars) paved the way for crossovers to become in demand. The Lexus RX300, one of the first luxury crossovers, proved to be a huge success as well.

As time moved forward and gas prices went skyward, the big, truck-based SUVs of the 1990s began to fall out of favor with buyers, many of whom had little use for their supposed off-road abilities but liked their cargo space and ride height. Now, it's safe to say most SUVs in America are crossovers. Even the brand-new 2011 Ford Explorer, once a traditional SUV mainstay, rides on the same platform as the Ford Taurus sedan.

For more information about crossover SUVs, follow the links on the next page.