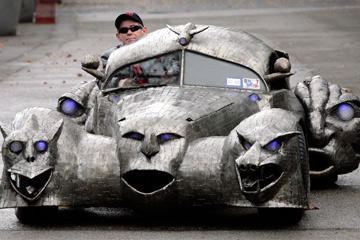 Image Gallery: Exotic Cars Artist William Burge sits in his art-car "Phantoms" at a presentation prior the Essen-Motor-Show 2007 in the city of Essen, Germany, on Nov. 26, 2007. See more pictures of exotic cars.
AP Photo/Martin Meissner

Designing vehicles is clearly a science -- well, lots of sciences, really. Especially if you consider the engineering, physics, metallurgy, chemistry, computer science and other "hard" disciplines required to make a machine that's air-, road-, or sea-worthy.

Designing vehicles also happens to be an art.

Alas, as with any category of art -- or attempt at art -- vehicle inventors, designers and manufacturers have come up with some pretty perplexing prototypes over the years. In this article, we'll take a look at the 5 strangest vehicles, as determined by HowStuffWorks.com's proprietary "Strange-O-Meter" ranking technology. Not familiar with that methodology? Well then, here's the way we ranked this collection of motorized madness.

The sheer volume of odd, alien, and often ill-advised vehicles out there is too staggering to account for them all in one top-5 ranking. So the Strange-O-Meter ranking algorithm, while too technologically advanced to explain here, works based on a few simple rules to narrow down the choices:

While we may not see these quizzical and often comical contraptions every day, we do generally benefit from their legacy. By pushing the boundaries of what's imaginable, they've allowed us to keep expanding the limits of what's possible, in making vehicles that are more aesthetically adventurous, more versatile, more efficient and, of course, more fun.