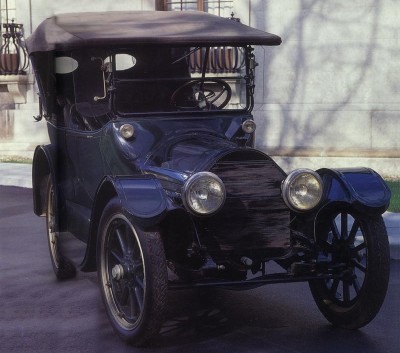 Cadillac sales had plummeted in 1914, and many would say this was because it had hung on to its Model 30 four-cylinder model for too long-after all, most other luxury makers were running with sixes. But Cadillac founder Henry M. Leyland decided to leapfrog his rivals with something even better: the Model 51 V-8. See more classic car pictures.
©Nicky Wright

By 1914, Cadillac's four-cylinder Model 30 had been in production for nearly five years, and the time had come for its replacement, the 1915 Cadillac V-8 Type 51. Not that there was really anything wrong with the Model 30, for it was a very competent automobile.

In fact, many years later when David Fergusson, long-time chief engineer for the Pierce-Arrow Motor Car Company, observed that "Cadillac for years had the reputation of producing the best medium-priced cars in the world," he was referring to the Model 30. One might question Fergusson's reference to the Cadillac as a "medium-priced" car, but in this world all things are relative -- in 1914 a new Cadillac touring car could be purchased for just $1,975, while the least expensive Pierce-Arrow cost $4,300.

But despite its outstanding reputation for reliability and durability, the Model 30 had become seriously dated. The public had come to appreciate the smoothness of six-cylinder engines, and many -- perhaps most -- producers of cars in the Cadillac's price range had made the switch from fours to sixes. The competition was simply eating Cadillac alive. From 17,284 cars manufactured during 1913, the factory's output had plummeted the following year to just 7,818 units.

Fortunately, Cadillac's general manager, Henry M. Leland, had not been caught napping. For several years he'd been experimenting with various engine types, and as a result of his research he came to the conclusion that a V-8 would be preferable to a six. Presumably, the compact nature of the vee-type design appealed to him, for in some instances the long crankshaft that characterized the inline sixes had displayed an unfortunate tendency to whip at high rpm.

Admittedly, the V-8 was an unusual design in those days. Most people had never seen such an engine, but the type was not unheard of. More than a decade earlier, two French manufacturers had developed V-8's and used them to power racing machines, while in this country Howard Marmon had demonstrated an air-cooled V-8 as early as 1906. And then, in 1910, the respected French firm of DeDion had marketed a production V-8.

Go to the next page to learn more about the development of the Cadillac V-8.

Charles Kettering, head of the Dayton Engineering Laboratories (DELCO) had purchased a DeDion V-8 for research purposes. With the help of his associate, Edward Deeds, Kettering disassembled the DeDion engine examined it carefully, then put it back together and tested it extensively. Afterward, Kettering and Deeds built an experimental V-8 of their own design and submitted it to Henry Leland.

Leland immediately undertook to authorize the in-house development of a Cadillac V-8, using the Kettering-Deeds engine as its basis. To take charge of the project he hired D. McCall White, a Scottish-born engineer whose previous employers had included the prestigious firms of Daimler and Napier. There is some evidence that Cadillac's engineering staff, a tight-knit group, took a dim view of having an outsider put in charge of so important a project, but obviously Henry Leland had his reasons.

First of all, the Cadillac people had had virtually no experience in building high-speed engines; in this respect, the better European firms were light years ahead of their American contemporaries. White was in a position to bring that expertise to Cadillac.

Then there was the matter of secrecy. Although he was very conservative by nature, Henry Leland was not without a sense of the dramatic, and he wanted to spring the new V-8 as a complete surprise. To keep the development of the new powerplant secret would have been quite impossible if the entire staff at the Cadillac factory had known what was going on.

So Leland housed the project in a small concrete block building, located a few miles out of Detroit in the community of Mt. Clemens, Michigan. The facility was out-of-bounds to all but a few carefully selected Cadillac employees, and those who were granted admittance were pledged to tell no one -- even their wives -- about the development of the new motor. Introduced in September 1914 as a 1915 model, the new Cadillac V-8 was known as the Type 51.

Nobody knows for sure how the model number was chosen, but it has been speculated that the digits may have represented a reversal of the year of introduction: 15. In any case, the car found instant popularity, with production reaching 13,002 units during its initial model year.

The engine of the Cadillac V-8 was cast in two blocks of four cylinders each, located exactly opposite one another. Fork-and-blade connecting rods were fitted. The crankshaft was drilled, and full pressure lubrication was employed, while a single, centrally-located camshaft operated the valves. Water circulation was controlled by means of an impeller pump, with a thermostat located within each cylinder block.

Cadillac had advertised the old Model 30 at "40-50" horsepower, a respectable enough figure by 1914 standards. But the new 314.5-cubic-inch V-8 developed a rousing 70 horsepower, five more than even the Packard Model 38, a car costing nearly twice the price of the Type 51.

The clutch was of the multiple dry disc type, far superior to the leather-faced cone employed by the Model 30. A three-speed selective transmission was used, and the spiral bevel final drive utilized a ratio of 4.44:1. Steering was of the worm-and-sector type, and both internal and external brakes operated on drums fitted to the rear wheels.

Eight body types were offered, with the popular open styles selling for $1,975, exactly the same as the previous year's four-cylinder Model 30. Prices for the closed body styles ranged from $2,500 for the Landaulet Coupe to $3,600 for the prestigious Berline Limousine. In whatever guise, the Cadillac represented a phenomenal bargain, for the Type 51 proved to be a fine automobile, as durable as it was powerful.

Since the new engine was America's first mass-produced V-8, of course questions were raised about it. Cadillac Countered with an advertisement that is still considered a classic. Appearing first in the January 2,1915 issue of The Saturday Evening Post, the ad was titled "The Penalty of Leadership." It marked the beginning of a highly effective advertising campaign in which Cadillac, which already billed itself as "The Standard of the World," undertook to present its owners as a breed apart, people distinguished by their own superior taste.

In truth, however, the new engine wasn't completely above criticism. The problem had to do with the single-plane (180-degree) crankshaft. The Cadillac would cruise smoothly and remarkably quietly at speeds between 55 and 60 miles an hour. But between 40 and 50, a more appropriate speed range given the condition of the roads in those days, it exhibited the same secondary out-of-balance shaking force that characterized the four-cylinder engines of that time. Not until the coming of the 1924 models would Cadillac develop a solution to the problem in the form of an inherently balanced crankshaft.

The public responded well to the Cadillac V-8. On the next page, learn how the sales success of this innovative model.

In the meantime, however, the Cadillac V-8 gave an excellent account of itself despite the roughness, and in its second year on the market a 38.5-percent sales increase was recorded. For 1916, the Cadillac's already impressive power was increased by 10 percent. Meanwhile, prices on the popular open models went up as well, by $105, but the Cadillac was still one of the industry's best bargains.

By that time, of course, war was raging in Europe, and Cadillacs -- in undetermined but apparently significant numbers -- were ordered by the Canadian, British, and French governments for use as staff cars, ambulances, and the like.

Then, in April 1917, the United States entered the conflict, and the Cadillac seven-passenger touring was adopted by both the U.S. Army and the Marine Corps as the standard officers' car. More than 2,000 of these sturdy automobiles were shipped overseas, along with a reported 300 Cadillac limousines, to be used by high ranking officers including General John J. Pershing, Commander of the American Expeditionary Force.

So well did these cars acquit themselves that some time later Colonel Edward J. Hall, co-designer of the Liberty aircraft engine, spoke of them as having given "better service than any other make of car in France." The colonel could not recall ever having seen a Cadillac "tied up for trouble of any kind," and in concluding his remarks he added, "One of the first things I did on my arrival home was to purchase one for my own use."

Cadillac, in those years, was not considered one of America's most prestigious automobiles. Historically, that honor had been more or less divided among the "Three Ps": Packard, Peerless, and Pierce-Arrow. But after the conclusion of the Great War (as our grandparents called it), the gargantuan machines on which those companies had built their reputation fell rapidly out of favor. The electric starter, pioneered by Cadillac back in 1912, had come into general use, and women by the thousands had taken the wheel of the family car. They, and in time their husbands as well, turned increasingly to Cadillac as an automobile of impeccable quality in a manageable size.

On the next page, see the specifications for the 1915 Cadillac V-8.

The 1915 Cadillac V-8 was automotive innovation for its time. On this page, you will find the specifications for this seminal car.