Checker station wagons were offered throughout the decade. This version was from 1965. See more classic car pictures.
©2007 Publications International, Ltd.

The 1960-1969 Checker was an opportunity for the general public to own a solid, dependable, no-frills Checker -- a car that they'd trusted for years as a taxi cab.

Morris Markin, a Russian immigrant who founded Checker Motors in 1922, had one trait in common with Henry Ford: a distaste for change. Once you get the right design, Markin figured, it made sense to stick with it. Apart from the Model T Ford, then, few automobiles have exhibited less year-to-year revision than the Checker.

Checkers were built tough and driven tough. When Markin entered the business in Chicago, competition from rival John Hertz's Yellow Taxi was anything but genteel.

Drivers who were handy with their fists were far more useful than those who merely knew the city streets. Through all those years, Checker cabs rolled regularly out of the plant at Kalamazoo, Michigan.

But wait; what are taxicabs doing in this article? They're here because Checker decided to give the general public an opportunity to drive one of the tough and dependable (if unfashionable) super-square sedans themselves.

So for the 1960 model year, Checker took its A8 taxi series, introduced four years earlier, spiffed up the interior, and placed it on sale as the Superba with a $2,542 price tag.

A heavier four-door station wagon also went on the market. Except for their interiors and lack of commercial markings, they were virtually identical to the taxis that prowled the streets of nearly every American city.

Those who thought the basic model a tad too austere could choose a Special; but even that wasn't quite plush inside.

Customers didn't exactly wait in frenzied lines, checkbooks in hand, for a chance to take home a Checker. Still, a few hundred practical souls yearly saw the merits of a tested, down-to-earth, no-frills design, billed as "the common-sense car America asked for."

If Checker taxis could hold up under the rigors of day-and-night operation, buyers reasoned, surely their non-commercial counterparts would also experience impressive longevity.

Longer in wheelbase than the typical American sedan, Checkers were shorter overall, measuring just 199.5 inches. As many as eight passengers could ride in reasonable comfort inside a Superba, through use of optional twin jump seats in the back, enjoying a hump-free floor. Wide doors made it easy to climb in and out.

For 1961, a new Marathon sedan replaced the initial Superba Special, and all sedans switched from 15-inch to 14-inch tires. Wagons adopted the ohv engine as standard.

Prices ranged from $2,542 for a Superba sedan to $3,004 for a Marathon wagon. Checker customers had a growing option list, including air conditioning, power steering, and an automatic transmission. By the end of the 1960s, the choices included bucket seats, a vinyl roof, two-tone paint, and Powr-Lok rear axle.

Sedans reverted to 15-inch tires in 1962. New that year was a Town Custom Limousine on a 129-inch wheelbase (nine inches longer than normal), carrying a hefty $7,500 price tag along with its vinyl top and glassed-in driver's compartment.

Overhead-valve engine output got a boost for 1963, to 141 horsepower. In 1964 the Superba name was dropped, so all standard-size Checkers were called Marathons.

Either an automatic transmission or overdrive was available, at $248 and $108 (respectively). "No other car looks like ... is built like ... rides like ... The Checker Marathon," trumpeted the mid-1960s sales literature.

Checker production slumped in the 1970s when Morris Markin died and his son David took over. By mid-1982, the final Checker rolled off the assembly line.

The fact that so many Checkers remain on the street, both in taxi and privately owned form, attests to the practical design and rugged build quality of this unyielding and unusual automobile. 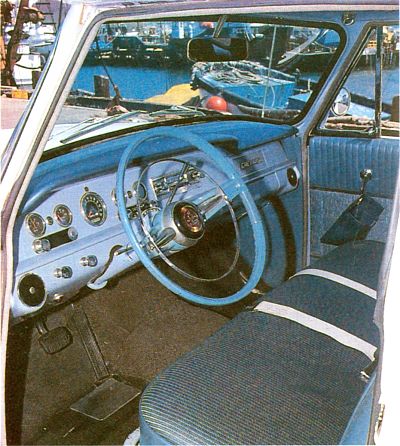 Checker did not focus on luxury. The interior of this 1965 Checker is quite spartan for the period.
©2007 Publications International, Ltd.

Although the 1960-1969 Checker had a nice run, sales began to slump in the 1970s when Morris Markin died and his son David took over. The last Checker was produced in mid-1982.

Note: A few Checkers were built in 1964 with Chrysler engines.