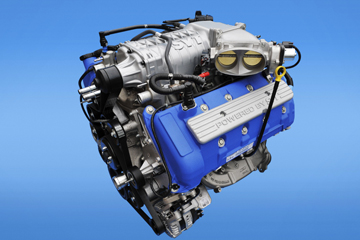 A larger, more-efficient supercharger is critical to helping produce the massive 650 horsepower in the 2013 Ford Shelby GT500. The TVS series 2300 creates 2.3 liters of displacement and is a unique design to the 5.8-liter engine.
(Courtesy of Ford Motor Company)

A supercharger (like a turbocharger) works by compressing an engine's airflow before it actually enters the engine. By adding more air, the engine can also mix in more fuel, which results in a bigger boom and, therefore, more power. If you don't have the luxury of going back in time to start off with a larger (and more expensive) engine, it's a relatively inexpensive way to give an older car a fresh start. When you're planning to spend hundreds (or more likely, thousands) of dollars on upgrades for your car, it's nice to have targets in mind. Specifically, that universal bragging number: horsepower. And even though a supercharger is a considerable investment, it's also one of the best, most efficient ways to exchange cash for power.

But before you start your boasting, it helps to understand the basics of how a supercharger works. Then it'll make a little more sense that a supercharger increases an engine's horsepower not as a flat rate, but in relation to the engine's original horsepower. To avoid conflict, manufacturers (at least the honest ones) generally express their products' performance potential in terms of a range. That way, potential customers aren't promised a certain horsepower output that may not even be possible ... but it's still enough to get people excited about what's to come. Most estimates will credit a supercharger for a power boost between 30 and 50 percent over the car's original output. Now, understand that 50 percent is a perfect-world scenario, and a supercharger does sap some efficiency from the car. So, on average, a supercharger adds a horsepower boost of about 46 percent of the engine's original specs.

Let's take a closer look at those numbers for a better explanation -- how to arrive at such an estimate, and why it won't always be accurate.

A supercharger increases the pressure of the air entering the engine so that it's more than atmospheric pressure. Atmospheric pressure at sea level is 14.7 psi (pounds per square inch), so a typical supercharger providing an increase of between 6 and 9 psi boosts the engine's air consumption by about 50 percent. As we already know, when more air can be sucked into the engine, more fuel can be mixed with the air. When this compressed air and fuel mixture is ignited during the engine's normal combustion cycle, it'll produce more power than the original output. So why can't supercharger manufacturers guarantee a true 50 percent horsepower boost? Well, the actual performance depends on the type of supercharger (yes, there are several different general kinds), the quality of the supercharger selected, proper installation and the general operating condition of the car itself. Another factor that plays a role? Whether the car was modified to optimize the supercharger's potential. Upgrading other components, like buying a higher-end exhaust system or adding an intercooler, will also increase the car's power and therefore unlock more of the supercharger's potential. When the initial horsepower is higher, remember, the resulting percentage increase will be higher as well. (There's more to a supercharger than horsepower, by the way. In addition to the horsepower increase, a supercharger also increases torque, which improves the fun factor of driving.)

Superchargers do, however, cost a little of the power they produce. Unlike a turbocharger, which runs off the engine's exhaust (waste) and therefore doesn't drink up any additional power, a supercharger is driven by a belt or a chain connected to the engine -- and that does drain some power, just as all other belt-driven accessories do (like air conditioning, for example). This is one of the reasons a supercharger can't deliver a promised and consistent power output -- the supercharger itself affects the way a car runs. In some cases, it can sap up to 20 percent of the engine's power before it contributes its own boost to the equation. For people who really want the specific experience of a supercharged engine, though, it's worth the tradeoff.

Author's Note: How much horsepower does a supercharger add?

Although this article focused on the effects of adding an aftermarket supercharger, that's not the only way to get a supercharger kick. Installing an aftermarket charger, though, is almost always done purely with performance in mind. And for good reason -- a well-built boosted car is a blast to drive. But since the objective is to improve performance, it's reasonable to assume that a car's efficiency will take a hit. Modified cars -- especially the loud, attention-getting variety -- aren't really known for being responsible or Earth-friendly. The people who drive such vehicles don't have a problem with that, and when I drove tuned cars, I didn't have a problem with it either.

Not to be a total hypocrite or anything, but I'm happy that superchargers are finding a more noble purpose. If you've shopped around at all lately, you might have noticed that factory supercharged engines are becoming a thing. They always were, on performance cars. But according to a bunch of auto manufacturers, and confirmed by the U.S. Department of Energy, superchargers have evolved into an efficient way to boost the performance of small cars. (Popular Mechanics says a boosted engine is about 10 percent more efficient than a non-boosted engine of equal power.) To rephrase: If a small, efficient engine is specifically designed to be optimized by a supercharger, it'll be fast and powerful enough that people might actually consider buying it.

This concept isn't exactly new -- I'm thinking specifically of the mid-'90s Volkswagen Corrado G60, which I loved then and still love to this day. Its modest 4-cylinder, 8-valve, 1.8-liter engine appeared in a bunch of other cars in its unmodified state (I owned several). But the factory supercharger made this car notorious. It wasn't cheap, particularly powerful or especially efficient. It was finicky, temperamental and didn't sell very well. The auto industry's come a long way in the last 20 years, though -- maybe it'll work this time around. 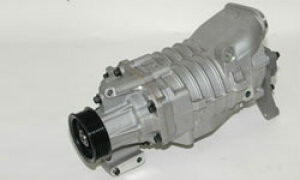 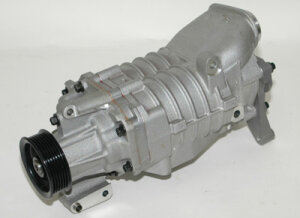