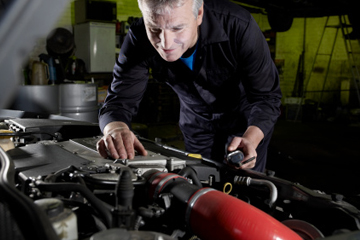 A cold air intake is a fairly inexpensive modification and a lot easier to install than most other engine mods. See more Car Engine Pictures.
Mike Harrington/Digital Vision/Getty Images

In the on-going quest to make our vehicles more powerful and fun to drive, people have come up with some great aftermarket systems. Of course there are lots of changes you can make to the engine like a new exhaust system, bolt-ons like superchargers and turbos but seriously, that stuff costs tons of money and you'll probably spend more than a weekend installing those parts.

And then there are cold air intakes.

Think of a factory air intake system as like having a cold that clogs up your head and restricts your breathing. Now go running. It's not going to work very well is it? A cold air intake is like amazing medicine that allows your engine to finally breath.

Cold air intakes move the air filter outside of the engine compartment so that cooler air can be sucked into the engine for combustion. Cooler air brings more oxygen (denser air) into the combustion chamber and that means more power. The filters are usually moved to the upper wheel well area or near a fender where there is more access to free flowing, cooler air and less hot air from the engine.

Not too shabby. But it gets even better.

Not only does a cold air intake reduce the air temperature, but it also increases airflow. Aftermarket intakes remove the need for a box surrounding the air filter and instead use large diameter intake tubes that are smoother, have less bends and are often wider than the original factory ones. Removing the air box and using smoother tubes gives the engine uninterrupted airflow.

Sounds pretty good right? But does it actually work?

This article reminded me of working on my brother's car back when we were in high school. We made several modifications to his turbocharged Eclipse (ok, it was a Plymouth Laser but it's the same engine!) and the intake was one of the things we changed. It definitely seemed to increase the power, or at least it sounded like it. I'm pretty sure that mod went better than the time we replaced the intercooler pipe and it popped off during our test run. There's nothing like thinking you blew something on the engine only to find out the pipe just needs to be reconnected! That car was so light and fast that we could get into some good races on the highway. I'm not condoning it...but it was fun.