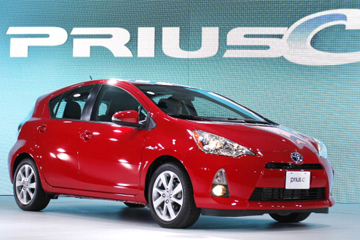 The 2012 Toyota Prius C hybrid is introduced during a press preview at the North American International Auto Show at the COBO Center on Jan. 10, 2012 in Detroit, Mich.
Bill Pugliano/Getty Images

For over a hundred years, engines got bigger, faster, and meaner, with more horsepower and torque. Exhaust belched from the tailpipes like a dragon awoken from its slumber to roar at potential thieves of its treasure. At least, that's what the guy with the wide tires and the airbrushed flame job wants you to think.

Then came the twentieth century, when we realized that fire-breathing engines were slaying more than red-light drag racing opponents. Turns out, all that belching was changing the climate and creating nasty smog. Too many dragons were making the planet more like Mordor than the Shire.

Who can save us from these exhaust-belching dragons? Who can tame their gas-guzzling ways with his sword of science and engineering? Who carries the one true ring of fuel efficiency? One man: James Atkinson of Hampstead, Middlesex, England. Also of 1887.

That's right -- the latest in green engine technology comes from the dawn of the automotive age. The Atkinson cycle engine was patented in the United States in 1887 (Atkinson filed for U.K. and European patents a couple years earlier). But the uneven strokes of the piston in his gasoline-powered combustion engine fit our modern hybrid systems pretty neatly.

The Atkinson cycle engine used in so many hybrids these days works on the same principle as the original -- with the obvious advantage of a century of technological advances. But in order to understand where we're at today, we first have to know where we've been. Set your time machine for 1887!

Atkinson's U.S. patent (number 367,496, for us patent-adoring nerds) is pretty straightforward: about a thousand words of text and a few helpful diagrams. Or you can just read this explanation, which is far wittier than any patent.

The most common combustion engine these days is a four-stroke Otto cycle engine, where a piston goes up and down inside a cylinder and a spark ignites a mixture of gas and air. Same goes for an Atkinson cycle engine, so here's a quick refresher of the process:

Intake stroke: Sucks air and fuel into the cylinder

Compression stroke: Squishes the mixture so when the spark goes off, it will explode -- big time

Power or expansion stroke: Uses the force created by the explosion to move the piston down the cylinder

Exhaust stroke: Pushes the nasty leftovers of the combustion process out of the cylinder

In an Otto cycle engine, this is done in two rotations of the crankshaft: intake/ignition, then power/exhaust. In the original Atkinson engine, the inventor added a couple of linkages so that all four strokes could be completed with a single rotation of the crankshaft.

That in itself would improve efficiency, but Atkinson had another realization: if the compression in the cylinder were lowered and the power stroke was longer than the intake stroke, the engine would work more efficiently. It would take less fuel to turn the engine, which turns the wheels and makes the car go.

Imagine, if you will, the cylinder and piston. On the intake stroke, the piston doesn't move all the way down the cylinder. The intake valve, where the air and fuel enter the cylinder, doesn't allow as much of the mixture into the cylinder. Less mixture requires less compression. The piston moves back up for the compression stroke, and at the top the mixture is ignited. Boom! The force sends the piston back down the shaft of the cylinder in the power stroke, this time all the way down to take advantage of every last bit of force generated by the combustion. Then the piston moves back up to get the junk out for the exhaust stroke. Ta da! Four strokes, less fuel!

Of course, clever reader that you are, you probably realized that less fuel and less compression mean less power. You are correct. Even though the piston is allowed to travel further down on the power stroke than it does on the intake stroke, it's not going to generate as much power as it does in an engine with higher compression and a richer gas mixture.

The other challenge with this engine is that it requires lots of extra parts, which makes it tricky to assemble, not to mention expensive. Poor Atkinson had to achieve all this efficiency with springs and vibrating links and a red-hot ignition tube, which sounds like an excellent name for a band. Modern engineers have a much easier time of it. 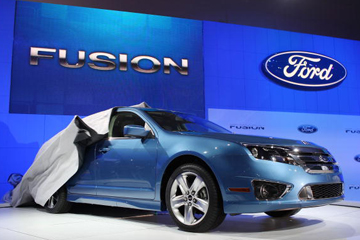 The Atkinson Cycle and Hybrid Cars

So, you've got an engine that's really efficient, but it lacks in power, especially of the torque variety, the kind of power that the fire-breathing drag car has in spades. But, if you're a hybrid powertrain engineer, you also have an electric motor that has all torque all the time, from 0 rpm. The problem with the electric motor is that it doesn't sustain a high speed very well, not as well as a gasoline engine does, with its higher horsepower. What to do, hybrid powertrain engineer?

Well, if you're Gilbert Portalatin, who happens to be a hybrid powertrain engineer with Ford, or any other engineer at almost any other car company building full hybrids, you bring these two systems together like chocolate and peanut butter. At low speeds, the electric motors kick in with their torque and move the car forward. Unless you're one of those super careful hypermilers who press the accelerator as gently as if a kitten were hiding underneath it, the gasoline engine will come online pretty quickly, though the electric motor is doing quite a bit of work. At about 40 mph or so, the Atkinson cycle engine will take over almost completely, with a bit of assist from the electric motor.

As long as you've got this kind of combo, you can engineer the Atkinson cycle engine to mesh precisely with the electric motor for optimal efficiency. If you insist on taking on the fire-breather in the next lane, you won't be left completely in the dust. "Smash the pedal, and you'll get what you're asking for -- all of both powerplants," said Lee at Toyota.

This load leveling is why a full hybrid like the Toyota Prius or Ford Escape get better mileage around town than they do on the highway -- exactly the opposite of, like, every other vehicle on the road. The non-fire-breathers among us drive pretty slowly around town. We start and stop a lot, and we don't get up to 75 mph, so the electric motor takes a lot of the burden. On the highway, though, the gasoline engine is pretty much working alone.

Hardly anyone in 1887 could have predicted the happy peanut butter-and-chocolate marriage between Atkinson's engine and electric motors -- cars didn't even have permanent roofs then.

To be perfectly honest, I love writing these super-technological articles. I love calling engineers and making them explain things to me that I have never studied. I have a hard time even picturing what they're talking about, so I make them repeat themselves six ways to Sunday to make sure I have it right before I write anything down.

This time, I got an extra-geeky bonus: nerd coloring book! Okay, it wasn't really a coloring book, but if you look up Atkinson's patent using Google's patent search (number 367,496, remember) it includes Atkinson's original diagrams. I used all eight of my highlighters and several colored Sharpies to keep track of which valves did what, and where the air was coming in and the exhaust was going out. Then I color-coded the patent text -- which I had also printed out -- so that when I was reading, I could match up vibrating link H in the description with its place in the engine.

I cannot recommend the coloring book method of technological learning enough. I plan on using it as often as possible. My inner eight-year-old is very happy.