How the Grail Engine Works 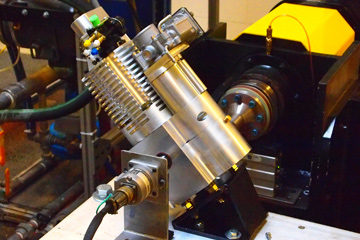 What if you were told that someday, your car could have a one-cylinder engine under its hood that has 100 horsepower, gets 100 miles per gallon (42.5 kilometers per liter), and can run on any type of fuel?

Odds are, you'd probably think that's something out of a science fiction movie, or that it's some kind of far-flung concept that's still decades away from reality.

Not so, according to Matthew Riley, the CEO and chief research scientist at Kansas-based Grail Engine Technologies. He says that his company's two-stroke Grail Engine could be in consumers' cars within two to five years. In February 2012, after three years of development, the company established their first working prototype, and big car companies like Honda and Ford have already shown interest.

Riley says the Grail Engine could be 50 percent cheaper to build while boasting 30 percent better fuel economy over current engines, and it's flexible about what fuel it runs on. It has a wide variety of possible applications, he said. It also doesn't have the pollution and reliability problems seen in most other two-stroke engines.

"It's going to change the way things work," said Riley, a scientist with more than 20 years of experience developing experimental engines. "The idea comes from the thought that there has to be a better way to make two-strokes because they're better performing."

What makes the Grail Engine so amazing? Interestingly enough, it doesn't rely on a single breakthrough technology to get the job done. The engine takes a variety of current, cutting-edge engine technologies and puts them all together in one package. "It's all proven technology that's been used in the past," Riley said.

In essence, it's a very high-tech two-stroke engine that uses forced induction, direct injection and other technologies for impressive power and efficiency. It's also a pioneer in what the company calls "semi-homogeneous charged compression ignition." We'll cover what all of that means in a little bit.

In this article, we'll learn all about how the Grail Engine works, and explore how it could be put to use in the very near future.

Before we learn about the Grail Engine, let's first define some of the concepts behind it so we can fully understand how it works.

Two-Stroke Engine: Unlike most modern car and motorcycle engines, the Grail Engine is a two-stroke engine. In vehicles, it's more common to find four-stroke engines. Here's what that means: On a four-stroke engine, there are four phases to the internal combustion process which causes a vehicle to move -- the intake of air and fuel, the compression of those ingredients, the ignition of air and fuel that forces the piston down and the release of exhaust gas.

However, a two-stroke engine completes that same process in just two steps. The intake and exhaust steps are combined together, as are the compression and ignition steps. Two-stroke engines are lighter and more powerful; but they aren't as fuel-efficient, they tend to break down more often and they also produce a lot of exhaust gas because oil and fuel mix together during the combustion process. This is why two-stroke engines are commonly only used in small recreational vehicles and yard equipment.

Direct Injection: DI is the hot new kid on the block when it comes to engine technologies. It's become a common feature on performance engines, and it's starting to find its way into more and more everyday cars as well. On a DI engine, fuel is sprayed directly into the combustion chamber rather than mixing with the air in a separate manifold. This lets the air/fuel mix burn more evenly and efficiently, resulting in increased power and better economy.

Forced Induction: Even if you've never heard of forced induction, you've likely heard of superchargers or turbochargers. Both do essentially the same job: they force more air into the engine so it burns hotter and harder, producing more power. The Grail Engine uses a unique type of forced induction (which we'll get into in just a bit).

Forced Semi-Homogeneous Charged Compression Ignition: Also known as FS-HCCI, this is a technology carmakers have been chasing after for years, Riley said. This process compresses air and fuel to the point where they nearly combust on their own without spark ignition (similar to the way a diesel engine operates). And when the air/fuel mix does ignite, all the fuel in the chamber burns simultaneously, delivering much better efficiency. That means more power and better fuel economy [source: Green Car Congress]. 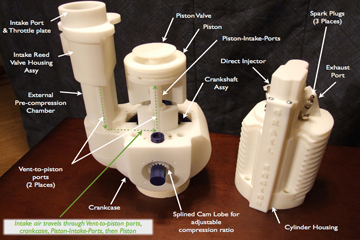 At just 500 cubic centimeters, the Grail Engine is quite small -- about one-fourth the size of the engine on a typical economy car.

At first glance, the company's prototype looks like any ordinary two-stroke engine, until you notice the large, upward-facing intake valve coming off the center of the piston. That has an important function we'll explore in a bit -- the Grail Engine makes much more use of air pressure than a normal internal combustion engine. The engine is comprised of: 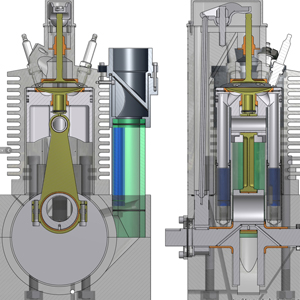 Like any internal combustion engine, the Grail Engine burns air and fuel and uses the resulting explosion to push a piston up and down to drive motion. But it's the way that the Grail engine does it that makes it so unique.

As the piston travels upward, a vacuum is created underneath it, which sucks fresh air in through a one-way reed valve. Air then fills three chambers -- the pre-compression chamber, the vent-to-piston ports and piston-intake-ports.

When the piston reaches the top of its travel path, ignition occurs thanks to the three spark plugs. This forces the piston downward, which compresses the air trapped in the crankcase up to this point.

As the piston reaches bottom dead center, the exhaust valve opens and exhaust evacuates cylinder as compressed air enters the combustion chamber via the vent-to-piston and piston-intake-ports as noted above through a one-way valve located within the piston.

Compressed fresh air swirls upward in a vortex-like fashion, evacuating the cylinder of exhaust gas and replenishing the cylinder with fresh air. Once the exhaust valve closes, fuel is direct injected and mixed in the chamber. The mixture of air and fuel are compressed and ignited by the three spark plugs, creating an explosion that pushes the piston down and creates motion for the next cycle.

Seems pretty simple, right? Overall, the Grail Engine appears very similar to an ordinary two-stroke engine, except compressed air plays a much bigger role here. But there are some unique factors at work here, too. For one, Riley says the swirl mixing of compressed air and fuel is the most efficient air/fuel atomization mixture that can be obtained for optimum combustion. In addition, he says no other engine has a design with forced induction of compressed air entering the combustion chamber while at the same time air-cooling the top of the piston to lower emissions.

Finally, the three spark plugs create a rapid bloom of explosions, which help generate "forced semi-homogeneous charged compression ignition," or FS-HCCI. This process compresses air and fuel to the point where they nearly combust on their own (without spark). And when they do combust, all the remaining fuel in the chamber combusts at once -- simultaneously -- delivering much better efficiency. This results in more power and better fuel economy [sources: Green Car Congress, Wojdyla]. 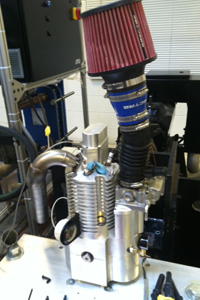 So the Grail Engine has a very efficient form of internal combustion. It's lightweight, inexpensive, and produces a lot of power for its size. As we said earlier, the 500 cc prototype can produce 100 horsepower while getting 100 miles per gallon (42.5 kilometers per liter). But what else can it do?

Riley said the Grail Engine eliminates many of the drawbacks normally seen on a typical two-stroke engine. For one, oil and fuel never mix together here, so it doesn't have a smoke problem. It's also very quiet and low on vibrations, he said.

Because the engine has fresh, compressed air moving through it at all times, it has no problem staying cool. The ability to keep the combustion chamber uniformly cool is what helps make FS-HCCI possible, Riley said. This increases thermal efficiency and cuts down on nitrogen oxide emissions. Also, it's not just limited to a single cylinder. The Grail Engine is modular in design, so several could be strung together to create a multi-cylinder engine [source: Wojdyla].

But as Riley likes to say, "Wait -- it gets better." The Grail Engine is designed to run on virtually any type of fuel, including gasoline, propane, diesel and natural gas. It can also carry more than one type of fuel at once in separate tanks. The engine can do so because an onboard computer can adjust its compression ratio on the fly, adjusting the motor accordingly whenever the driver wants to use a different fuel.

Also, its design prevents the contamination of hydrogen currently seen on fuel cell cars, making that type of fuel more feasible than ever. "This puts fuel cells into a whole new light," Riley said.

We've already talked about how potent the Grail Engine is, and how it boasts better fuel economy and efficiency than a normal two-stroke engine. But where could it be used? Well, just about anywhere, Riley said.

"It could be applied to every area of life, from automobiles to aircraft, and recreational and industrial engines," he said. "We have a lot of interest in different areas."

Besides carmakers, Riley said the Department of Defense has expressed interest, but he said he can't talk about exactly what that project is. Also, it could make an ideal helicopter engine, he said.

While the current prototype Grail Engine is 500 cubic centimeters, the scientists are working on larger models, including 1,000 cc and 2.5-liter engines.

Plus, Riley says he and his employees are motivated by a desire to make the world a better place, not to get rich. Their goal is to get existing car companies to produce licensed versions of the technology. He hopes it might also pave the way for a greener future. "We don't want to put anyone out of business," Riley said. "We want to help people. We want to change the world for better."

I couldn't help but be impressed with Grail Engine Technologies' design. It is certainly ambitious, but it's based on existing technology, so it seems more feasible than some experimental engines. They seem to have found a way to get the power of a two-stroke engine without the pollution, and with better fuel economy than most current engines. It's interesting that the company seems to have "green" motivations, rather than just being profit driven. Maybe we'll see a Grail Engine car sometime soon -- it doesn't sound too far-fetched to me.