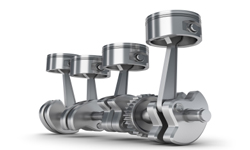 Image Gallery: Engines The dominance of gas engines in the automotive market is going to persist for the foreseeable future. See more pictures of engines.
© iStockphoto.com/Alexandr Mitiuc

With all the hype about hybrid, electric and alternative fuel cars, it's easy to think that the age of the gasoline engine is over. When you've got cars that run on hydrogen or that plug into the wall, the internal combustion engine can seem downright passé.

But the fact remains that the vast majority of cars sold in the United States are powered by gasoline engines. The dominance of gas engines in the automotive market is going to persist for the foreseeable future. Car makers use gasoline engines for a lot of reasons. People are used to them, there's an infrastructure that supports them, and they fit nicely with how most Americans use their cars.

That's not to say that gasoline engines don't have their downsides. They pollute and they're dependent on gasoline -- which leaves American drivers subject to shifts in fuel prices. Though the engine in the car in your driveway has a lot in common with the engines used on the earliest cars, new innovations in engine technology have allowed carmakers to negate some of the problems associated with gasoline automotive engines. Improvements in power, fuel efficiency and emissions are letting people drive the types of cars that they like while also reducing the amount they pollute and the money they spend on gas.

Looking at some of the new technology that improves fuel economy by just a few miles per gallon may not seem like much, but keep in mind that with almost all cars on the road using gasoline engines, small improvements have big impact nationwide. Currently, electric and hybrid cars only make up about 2 percent of the cars on the road. Making the other 98 percent more efficient saves money, reduces dependence on foreign oil and cuts pollution while keeping new cars affordable and appealing to most buyers.