by Cherise Threewitt
NEXT PAGE
Mazda's SKYACTIV-X engine is the world's first commercial gasoline engine to use compression ignition. Mazda

In summer of 2017, Mazda made an announcement: The auto company found a way to make compression-ignition gasoline engines for passenger cars. Mazda claimed its new engine could improve fuel economy by 20 to 30 percent, which is a considerable achievement for a gasoline engine.

Before taking a dive into this technology, it's worth noting that the compression-ignition engine isn't a new concept. Formula 1 cars use compression-ignition engines, and several other automakers have attempted to develop a commercially viable version for passenger cars. But Mazda's engine, dubbed the Skyactiv-X, will be the first mass produced and commercially available engine of this type. Thanks to Jay Chen, a powertrain engineer with Mazda, HowStuffWorks was able to learn how this breakthrough was achieved. First, though, we have to take a look at an engine's basic functions.

An engine works by igniting fuel in two ways: heat and compression. Spark-ignition engines are found in most gasoline cars. In these types of engines, the spark plugs fire to ignite fuel in the combustion chamber, while the fuel and air mixture is also being compressed. This is a very simplified version of the process, of course, just to illustrate the main difference between the two engine types. Spark-ignition engines follow a cycle and require precise timing to work, but are generally reliable under a variety of conditions [source: Knight].

Compression-ignition engines operate more like diesel engines. Diesels are designed for much higher compression (which requires heavier components and stronger construction) and use glow plugs as a heat source rather than spark plugs. Glow plugs heat up the compression chamber, which in turn increases the compression within the chamber. When the fuel is added to the chamber, it's sprayed across the tip of the glow plug, but the process relies on the compression more than the contact of the fuel and the plug. The lack of "spark" helps diesel engines achieve higher EPA ratings than gasoline engines with otherwise similar specs [source: Stewart].

If we're focusing on gas, you might be wondering, what's the point of explaining how a diesel engine works? Simply, to illustrate the importance of compression. The best way to improve the gas engine is to figure out how to increase compression, which enables the engine to use its fuel supply more efficiently.

A compression-ignition gasoline engine combines the best parts of these processes. The engine is programmed to trap air (typically, engine exhaust) in the engine cylinder by adjusting the timing of the exhaust and intake valves. The fuel injectors add fuel to this trapped exhaust, and since the trapped mixture is under very high compression, the relatively small amount of fuel is able to ignite.

Compression-ignition engines can even be broken down into two different types [source: Lindberg].

The main difference between these two engines is the point in the process in which the fuel is added, achieved through adjustments to the engines' cycles and timing. Otherwise, the engines function similarly; the compression is the most important factor. 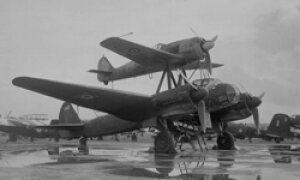