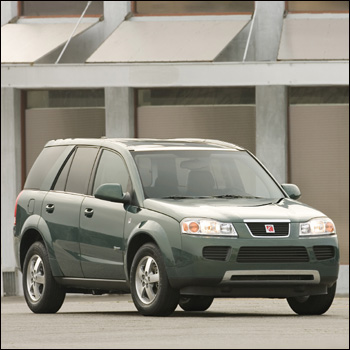 In the next few years, Saturn plans on selling a plug-in version of its hybrid Vue Green Line midsize SUV. See more

Because of their promise of improved fuel economy and reduced tailpipe emissions, vehicles employing hybrid drivetrain technology have drawn the attention of both the media and automotive consumers. There is no question that the technology works, typically providing fuel economy gains of 25-40 percent when compared to similar vehicles with conventional drivetrains.

While several manufacturers claim to be working on the technology, General Motors' Saturn division has promised to introduce a plug-in hybrid version of its Vue SUV by 2009.

Expanding further on plug-in hybrid technology are two vehicles still in the concept stage. The Chevrolet Volt, which was introduced at the 2007 Detroit Auto Show, and the Ford Edge with HySeries Drive, also introduced in 2007, combine elements of plug-in charging with other potentially fuel-conserving technologies.

Many hybrid vehicles conserve additional fuel by incorporating a shut-off system that shuts down the engine during stops. In these cars and trucks the electric motor alone may propel the vehicle for short distances. 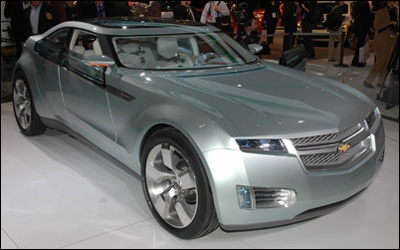 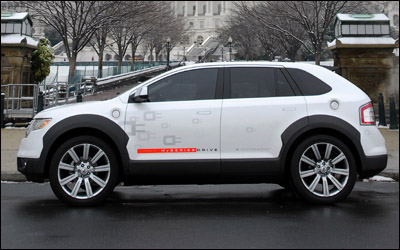 While Vue will be able to run on its gas engine after the battery's power is exhausted, the Chevrolet Volt Concept's motor will solely get its power from the electric battery. This concept car is most notable for what it doesn't have than for what it does. Not a hybrid in the conventional sense, the Volt's gasoline engine never powers the vehicle's wheels. Instead, in the event that the car's plug-in charge is depleted, a small gasoline engine is used to power a generator that supplies back-up electricity. As the gasoline engine never provides power directly to the drive wheels, Volt does not require a conventional transmission.

Relatively light and compact, Volt's three-cylinder engine weighs less than a long-range battery pack might, and consumes less space. The gas backup provides an added dimension of range as well as flexibility, providing immediate power when time for a full battery charge may not be available.

Though displayed only with the gasoline engine at the 2007 North American International Auto Show in Detroit, Chevrolet says that Volt's backup power could also be provided by a diesel engine or a hydrogen fuel cell.

While the stylized two-seat Volt is not a likely candidate for production, its gas-assisted electric drivetrain may someday find its way into Chevrolet's lineup.

While more conventional in appearance, the Ford Edge with HySeries Drive Concept showcases technology very similar to Volt. Introduced at the 2007 Washington Auto Show, the Edge HySeries features electric drive with power coming from either a plug-in charged battery, or a hydrogen fuel cell.

Unlike the Volt Concept, which uses another power source to supplement the plug-in charge, Edge HySeries uses plug-in charging as a backup for the fuel cell.

Fuel cells, like the one in HySeries, create electricity-using hydrogen as fuel. Because hydrogen-filling facilities are scarce, the plug-in electric backup power source adds a much-needed dimension of range and safety.

While Volt is purely a concept vehicle, the Edge HySeries is completely functional, though a similar regular-production vehicle is unlikely in the near future.

These concepts from Chevrolet and Ford look down the road at another generation, one working toward the end goal of fossil-fuel independence. In time, they may be able to bridge the gap between gasoline and electric powered cars; making the goal of an automotive landscape virtually independent of fossil fuels a reality.