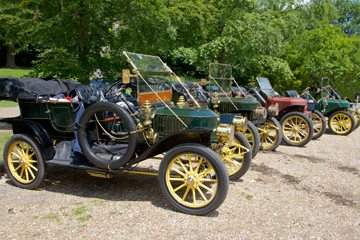 Steam-powered cars, like these vintage Stanley Steamers, are good examples of an external combustion engine being used to power an automobile.
(Peter Cook/Dorling Kindersley/Getty Images)

The steam engine was first seen in machinery, such as trains and farm equipment, and under those heavy-duty loads, the noble steam engine was able to prove itself road-worthy enough to power an automobile. Once a steam engine comes up to full heat, it provides consistent pressure. In practical terms, that means the car can be driven without the need for a geared transmission. One example, the Stanley Rocket, was able to achieve speeds up to 127 miles per hour (204.4 kilometers per hour)—and this was in 1906! Steam-powered cars retained their popularity even after internal combustion engine technology was on the rise, in part because, at the time, a car powered by an internal combustion engine needed to be hand-cranked, which was difficult and often dangerous. The electric starters that we use today hadn't been invented yet. Around the time Ford's Model T was launched, new electric components were beginning to make cars much more convenient. Cost was a factor in the shift, too. The most popular steam cars cost about six times as much as the mass-produced Ford, causing them to slowly die out. Steam cars are now seen as something of a curiosity. They're popular with collectors (Jay Leno is a noted steam car enthusiast) and their reliability means that there's plenty of vintage examples still around. Steam engines are also a source of intrigue for some researchers and engineers. In fact, many of them believe the efficiency of the steam engine, combined with modern technology, gives steam-power plenty of potential for a comeback.

The Stirling engine, which was developed by a Scottish inventor in the early 1800s, has also done some time powering automobiles of the past, although its popularity stalled out after its initial rise because the materials used to build early versions of the engine could not withstand the extreme heat necessary to run it. This type of engine, similar to the steam engine, uses pistons to create power, but the heat comes from outside the engine. Now that better and stronger materials are available, the Stirling may have fresh potential. Stirling engines do offer some advantages, like their ability to run on any type of fuel, which inspired Detroit automakers to experiment with the Stirling during the 1970s. More recently, in 2012, a Stirling-powered car entered the Shell Eco-marathon Europe, a competition for experimental alt-fuel vehicles. The car didn't meet the contest's qualifications and was unable to race, but it succeeded in getting people to consider the Stirling engine once again.

Classic Chevy Engines
What does the VTEC system in a Honda engine do?
How Diesel Engines Work