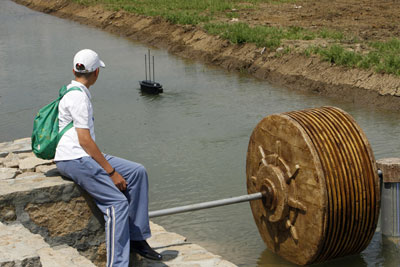 A boy watches a radio-controlled boat in the town of Smiljan, Croatia, Nikola Tesla's hometown. Nearby is a bladeless waterwheel turbine of Tesla's design. The same principle powers his famous turbine engine.
Hrvoje Polan/AFP/Getty Images

Most people know Nikola Tesla, the eccentric and brilliant man who arrived in New York City in 1884, as the father of alternating current, the form of electricity that supplies power to almost all homes and businesses. But Tesla was a prodigious inventor who applied his genius to a wide range of practical problems. All told, he held 272 patents in 25 countries, with 112 patents in the United States alone. You might think that, of all this work, Tesla would have held his inventions in electrical engineering -- those that described a complete system of generators, transformers, transmission lines, motor and lighting -- dearest to his heart. But in 1913, Tesla received a patent for what he described as his most important invention. That invention was a turbine, known today as the Tesla turbine, the boundary layer turbine or the flat-disk turbine.

Interestingly, using the word "turbine" to describe Tesla's invention seems a bit misleading. That's because most people think of a turbine as a shaft with blades -- like fan blades -- attached to it. In fact, Webster's dictionary defines a turbine as an engine turned by the force of gas or water on fan blades. But the Tesla turbine doesn't have any blades. It has a series of closely packed parallel disks attached to a shaft and arranged within a sealed chamber. When a fluid is allowed to enter the chamber and pass between the disks, the disks turn, which in turn rotates the shaft. This rotary motion can be used in a variety of ways, from powering pumps, blowers and compressors to running cars and airplanes. In fact, Tesla claimed that the turbine was the most efficient and the most simply designed rotary engine ever designed.

If this is true, why hasn't the Tesla turbine enjoyed more widespread use? Why hasn't it become as ubiquitous as Tesla's other masterpiece, AC power transmission? These are important questions, but they're secondary to more fundamental questions, such as how does the Tesla turbine work and what makes the technology so innovative? We'll answer all of these questions on the next few pages. But first, we need to review some basics about the different types of engines developed over the years. On the next page, we'll get a better idea of the specific problem Tesla was hoping to solve with his new invention.