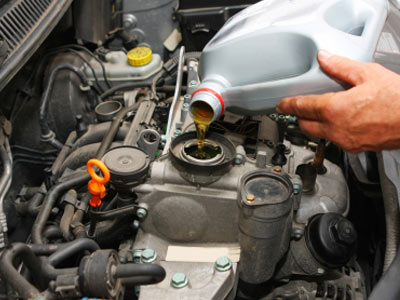 Wouldn't it be something if you never had to change your engine oil again?­ See more pictures of car engines.
iStockphoto.com/bojan fatur

Auto manufacturers such as BMW, Mercedes, Audi and Volkswagen all market lifetime transmission fluid and state the original fluid will last the life of the transmission. Take a 2009 BMW, for example. Pick your model, it makes no difference. All new BMWs come with a 4-year/50,000 mile (80,467-kilometer) warranty which includes oil changes. But when you look at the service schedule, you don't see a transmission fluid change anywhere.

Of course, just like the rest of us, owners of these high-end vehicles must regularly change the engine oil and check the various fluid levels; however, they don't need to change transmission fluid. It seems like the next logical step would be lifetime engine oil, right? Wrong. Engine oil is a completely different ballgame.

­Unlike transmission fluid, engine oil serves three main purposes. Most people probably already know oil lubricates the engine's internal components such as the bearings, crankshaft, camshafts and lifters. Perhaps less known are the remaining primary functions -- cooling and cleaning. Oil cools internal engine components and keeps engine temperatures under control while detergents and additives remove carbon build up and dirt that has found its way into the crankcase through the combustion chamber by way of the air intake. Sure, transmission fluid lubricates and cools, but your car or truck's transmission is a completely sealed system. It doesn't have to cope with the outside elements that come in through the intake and combustion chamber. In addition, transmissions do not generate the same type of heat.

Let's take a closer look into oil and why developing lifetime liquid gold may be nothing more than a pipe dream.

Oil: The Lifeline of Your Engine

Unlike transmission, power steering and brake fluid, engine oil has the added responsibility of removing soot and dirt from inside the engine. A transmission is a closed system, meaning it does not have any way for dirt and debris to enter its interior. An engine, on the other hand, is relatively wide open to dust, dirt, pollen, water and of course, engine exhaust. While gaskets and piston rings do a diligent job keeping the engine cycles independent of each other, exhaust, soot and outside dirt inevitably finds its way past the pistons and into your engine's crank case.

Because cleaning is one of the principal duties it takes on every time the engine fires, engine oil has a life cycle. Have you ever looked at used engine oil and wondered why it's black? The simple answer is soot and dirt. Engine oil contains additives and detergents within in its ingredients that effectively carry away all that grime. Think of oil along the same lines as blood in the human body. While blood carries oxygen throughout the body to all the different organs, oil cools, lubricates and carries away dirt. The black color that you see is actually all that grime trapped in the oil. While some synthetic oils can still function while they're relatively dirty -- thus the extended time between synthetic oil changes -- there's a limit to its cleaning capacity. It's for these reasons that lifetime engine oil is simply not practical.

Heat is another factor. Engines can reach temperatures well in excess of 275 degrees Fahrenheit (135 degrees Celsius). Those high temperatures tend to change the chemical composition of oil. Synthetic oils handle heat better, but conventional mineral engine oils break down at high temperatures and lose their original chemical composition after repeated use. Traditional thinking always said you should change your engine oil every 3,000 miles (4,828 kilometers). With synthetic oil, you can go much longer between oil changes. For instance, BMW recommends an oil change every 15,000 miles (24,140 kilometers) for the MINI Cooper.

For now, the closest you will probably get to lifetime engine oil is by using synthetic oil. Synthetic oil differs from mineral or refined natural oil in many areas -- including cost. Expect to pay three to four times more for synthetic oil. But remember, manmade oil will extend the period between oil changes. Pure Power Inc. sells a lifetime, washable oil filter for about $199, or roughly the cost of 40 disposable filters; however, that only solves the filter portion of the equation. The bottom line is that you must still change your oil on a regular basis -- at least for now, anyway. Oil is the lifeline of your vehicle's engine. Be sure to manage it as such.

For more information about engines, engine oil and other related topics, follow the links on the next page.

So what is sludge?

If you're lucky, you haven't had a mechanic inform you that you have sludge in your engine. If you're on the other side of the coin, there's a good chance that your engine has probably seized or maybe it's just well on its way to fritzville. Sludge is sticky, caramelized oil that accumulates on all of your engine's vital components. Once your engine is burdened by sludge, it only a matter of time before you'll experience problems. Most of the time, sludge is a direct result of negligence. If you don't regularly change your oil, you can count on problems down the road. Fight sludge -- change your oil frequently.

How do exhaust headers work to improve engine performance?
How to Do an Engine Oil Analysis
How Opposed Piston Opposed Cylinder (OPOC) Engines Work