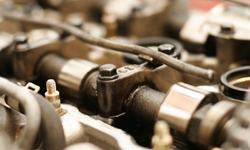 Car Engine Image Gallery When oil is subjected to a high enough temperature, it can solidify and become baked onto the surface of whatever is close by, like engine oil passageways or other critical engine parts. See more car engine pictures.
© iStockphoto.com/Greg Byerly

If your arteries ever became clogged with gunk -- as does happen from time-to-time with us humans -- you and your doctor would want to take instant, massive action to fix the situation.

Similarly, if your car were ever to develop lots of oil deposits, you'd be well-advised to take immediate action as well. In both cases, the "heart" of the entire works -- your actual heart in your own body and the engine in your car -- would be in danger of seizing and suffering long-lasting harm.

We know that a sloppy diet and too little exercise cause sticky deposits called cholesterol to block our arteries. But what's the culprit behind oil gumming up our engine -- isn't oil one of the good guys when it comes to car engine health?

Well, yes, it is. But when oil is subjected to a high enough temperature, it can solidify and become baked onto the surface of whatever is close by, like for instance, a narrow engine oil passageway or critical engine parts themselves. It can also lose its viscosity and become a tar-like goop that makes life hard for your vehicle's engine.

When enough of these deposits collect, the possibility of a vehicle engine underperforming or even dying, go up dramatically. Thick or solid oil can have the reverse effect that clean, normal oil has. Instead of cleaning, lubricating and cooling your engine, it can pollute, hinder and contribute to overheating.

This article lists five of the most common clues that your vehicle is harboring oil deposits. Notice them too late and you could be facing a steep repair bill. But catch them early enough, and you could save yourself an engine and many greenbacks, not to mention peace of mind. 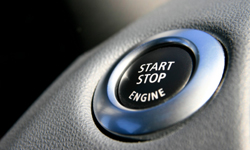 A difficult start could be alerting you to one of several different problems lurking under the hood.
© iStockphoto.com/COffe72

You turn the key and just get a labored chug-a-chug-chug from the starter motor. Finally, the engine turns over and catches, but you know it shouldn't be that hard.

That symptom could be alerting you to one of several different problems lurking under the hood. One unpleasant possibility is that one or more of the car's spark plugs have become coated with oil. This can happen if the valve cover gasket or any grommets sealing off the valve train from the spark plug holes is leaking. If it is, then oil being splashed about inside the valve train is also escaping to foul your spark plugs.

The fix doesn't have to be expensive -- clean the fouled spark plug(s) with a degreaser solution and replace the valve cover gasket(s), making sure to torque the cover down only to the manufacturer-specified pressure. Any tighter than that and you could create an oil leak all over again!

Spark plugs provide the very necessary function of igniting fuel in a carefully choreographed sequence. If the spark is off even a fraction of a second, that cylinder won't fire properly. In an ignition misfire, the spark plug for a given cylinder fails to ignite the fuel when it enters the combustion chamber. You would feel this as a sudden jerk of the engine while it's running.

As far as oil goes, this usually occurs because a layer of oil has coated the spark plug. As previously noted, the culprit is often a worn seal such as a gasket, grommet or O-ring. Check the spark plugs and look for an oily sheen or even soft deposits on or near each spark plug's electrode and insulator. Even if just one is fouled with oil residue, you'll want to replace the entire set.

While you're at it, check the inside and outside of the spark plug boots and clean them of any oil build-up as well, using a degreaser and a lint-free towel.

Oil can foul your spark plugs and cause poor performance due to lots of reasons. While worn-out valve cover seals happen to be the easiest reason to fix, the troublemakers could also be: 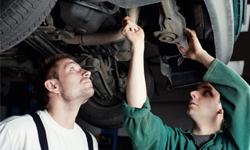 The O2 sensor typically screws into the vehicle's exhaust system, either in the exhaust manifold or a pipe downstream.
© iStockphoto.com/Bartlomiej Szewczyk

When Oxygen Sensors Go Bad -- it's not a reality TV show, but a real-life occurrence which you don't want to experience any time soon. That's because the oxygen sensor, also known as the O2 sensor, acts as a canary in the coal mine for your vehicle.

When your engine is burning fuel as it's supposed to, without any contaminants creeping in and becoming part of the exhaust gases, the O2 sensor is content as can be. But when too much other stuff starts getting burnt as well, the O2 sensor catches wind of it (so to speak). If the contamination is bad enough, the sensor will activate the vehicle's Check Engine light.

The O2 sensor typically screws into the vehicle's exhaust system, either in the exhaust manifold or a pipe downstream. If it's contaminated with oil (a sign that oil is leaking into the combustion chamber and being burned), the sensor tip will have dark brown deposits.

Oil deposits or any other deposits on the sensor tip are bad news because they can cause a "false lean" reading. In other words, this fouling of the sensor tip tells the engine computer that the fuel mixture is too lean and needs to be made richer. That, in turn, can cause problems including surging (unwanted bursts of power), poor fuel economy and higher carbon monoxide emissions.

One of the main jobs of engine oil is to transfer heat away from the engine. As a fluid, oil runs throughout the engine and bathes moving parts so that they don't scrape each other to bits from being in contact with one another.

Oil absorbs the heat from all that whirring, rotating and thrashing about that takes place in the engine. As the oil circulates back to the oil pan, it cools off so that it can repeat the circuit and remove more heat. The oil has to be at the right consistency to do this. If it's too thin or if it's thick and sludgy, it'll be inadequate to properly cool the engine for long.

An overheating engine, indicated by an engine temperature gauge on the instrument panel cluster, is one possible sign that oil has gotten too thick and is either caking or coking to put your engine in jeopardy.

You might even be able to eyeball it by shining a flashlight into the oil filler hole of your vehicle's crank case. If the situation is really bad, you might see black sludge coating the inside surface.

ExxonMobil, the global energy conglomerate, offers some info and advice on engine oil deposits, including the high-heat phenomenon known as coking:

"'Coke' is the solid residue remaining when oils undergo severe oxidative and thermal breakdown at extreme engine temperatures. The higher the temperature, the harder, blacker and more brittle the residue.

Deposits are not desirable, but if they do form, you want them to stay where they are. Coke shedding can cause blockage of filters and engine oil system passageways." 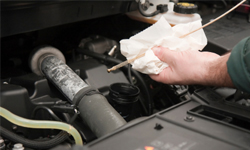 Your car's supply of oil is supposed to be a closed loop -- you put in several quarts and that same amount is constantly filtered and recycled. Rarely, if ever, should you have to keep adding new oil. You only need to replace it every so often per the manufacturers' directions.

So, if all of a sudden you see the "check engine oil" or oil pressure light come on, especially while driving, you may have serious trouble. Even if the amount of oil is fine, sludge may have deposited in a crucial oil passageway, blocking the flow and circulation of oil throughout the engine. If fresh, viscous oil can't circulate, the engine will quickly grind to a halt and probably suffer serious damage.

In this case, the deposits are more than just small flakes -- they can congeal into thick chunks of material that not only look gross, but also have a potentially catastrophic effect on your vehicle's engine (and your wallet, too).

Clearly, when it comes to oil deposits, an ounce of prevention is worth a pound of cure.

While some makes and models are more prone to oil deposits than others, there are several things you can do to keep your vehicle's engine healthy:

For more information about oil deposits and other related topics, follow the links on the next page.