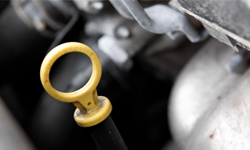 Image Gallery: Engines One of the services an oil change technician might suggest is an engine flush, which is exactly what it sounds like -- it flushes the gunk out of your engine. See more pictures of engines.
© iStockphoto.com/Andrew J Shearer

Many oil-change chains offer extra services these days, from transmission fluid changes to air conditioning maintenance. One of the services an oil change technician might suggest next time you're in is an engine flush, which is exactly what it sounds like -- it flushes the gunk out of your engine.

Chemicals are poured into the engine, which is then gently idled for a few minutes to make sure the cleaning agent reaches everyplace oil would normally go. Then the chemicals are drained, just like the oil would be for an oil change. As a matter of fact, an engine flush is often performed after the old oil is taken out and before the new, clean oil is poured in.

Clean is good, but keep in mind that many manufacturers advise against performing and engine flush on modern vehicles. Chris Martin of Honda goes said, "Our engineers have conducted exhaustive tests to create specialized maintenance products and service standards that support the performance and longevity of Honda vehicles, and these standards don't include engine flushing." Engineers at GM said, "Engine oil flushes are not recommended. If oil is changed on schedule, you shouldn't have to flush the engine."

There may be a few instances where an engine flush is required, but be aware that engine technology has progressed to the point that many newer vehicles not only don't need and engine flush, they may be harmed by the procedure.

Keeping that caveat in mind, let's take a look at five benefits of engine flushes.